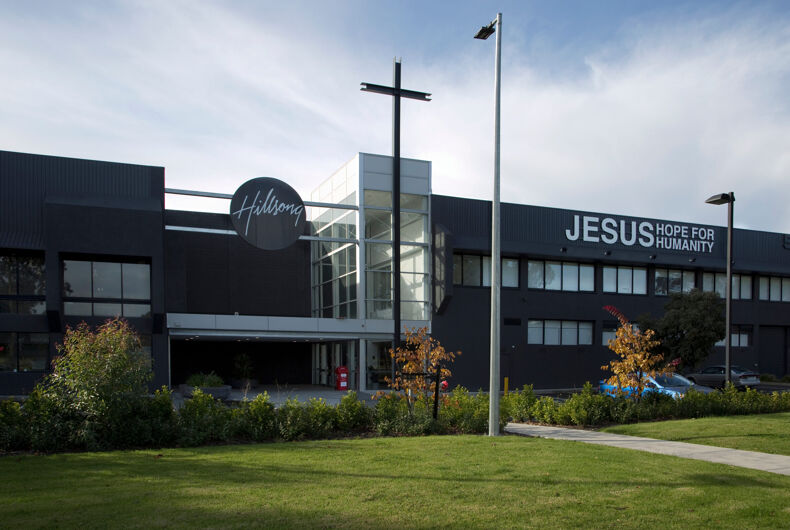 A New York Times report published this weekend revealed that Facebook has struck a deal with Hillsong Church. The church had previously announced a “partnership” with the social network, but the report unveiled previously undisclosed details, including the plan for Facebook to use Hillsong’s newly opened Atlanta branch as a study case to determine if Christianity can “go further on Facebook.”

Hillsong is a “hipster” megachurch with millions of followers around the world, including many American-based celebrities, with a storied history of promoting conversion therapy, preaching or standing against gay people, and refusing to employ LGBTQ people as church leaders or even volunteers.

Related: Guardian of the Galaxy’s Star-Lord revealed as bisexual. Will Chris Pratt have a religious issue?

The Times learned details about Facebook’s new push in the religious realm from speaking with Atlanta pastor Sam Collier, limited by a non-disclosure agreement, and other faith leaders who are working or have worked with Facebook. They say that Facebook’s developers have been meeting weekly with Hillsong leadership to forge the partnership over a series of months.

Collier said, “They are teaching us, we are teaching them. Together we are discovering what the future of the church could be on Facebook.”

He had sought “advice” from the website about how to build a following for the new church amid a pandemic, and Facebook responded with a “proposition.”

Collier praised the partnership as furtherance of “the Great Commission,” referring to Jesus’ instruction to his disciples to continue spreading his gospel after his resurrection.

He also told the Times this would “directly impact and help churches navigate and reach the consumer better,” before correcting and saying “parishioner” because “consumer isn’t the right word.”

Facebook is now partnering with several other faith leaders across the country after courting many of them at a virtual faith summit, organized by Facebook and including Catholic and Islamic religious leaders as well.

The company’s COO Sheryl Sandberg shared virtual resources with the invited leaders and said, “Faith organizations and social media are a natural fit because fundamentally both are about connection.”

Hillsong has received previous criticism for supporting conversion therapy, although Houston has since said the church doesn’t try to “fix” gay members any longer.

“They feel like ‘maybe I’m gay’ and they go to a youth leader and they are rejected,” church founder Brian Houston said in a 2013 sermon. “At that moment a great hatred comes in. At that moment some of them have gone so far with the rejection and gone to parents who didn’t understand and ended up committing suicide. That’s the weight we live with.”

“Hillsong Church welcomes ALL people but does not affirm all lifestyles,” Houston wrote in a blog post on the church’s website in 2015 that remains available. “Put clearly, we do not affirm a gay lifestyle and because of this we do not knowingly have actively gay people in positions of leadership, either paid or unpaid.”

The church even “corrects” misconceptions that even make it appear that Hillsong supports LGBTQ people, as they did in August 2015.

In 2017, Hillsong advocated against marriage equality in Australia and advocated for followers to do the same.

A 2017 expose gave insight on how LGBTQ people are treated within the church.

“Gay people need to know that when they go to Hillsong, they have to go to the back of the bus.” one gay former congregant told The Daily Beast. “Hillsong is hip and attractive and contemporary, but there’s certainly nothing contemporary about what LGBT people will face if they want to be a leader in the church or offer themselves up for service. That’s something [Hillsong] will have to be upfront with, and they haven’t been so far.”

Still, several stars in Hollywood and around the entertainment world, such as Justin Bieber, Kevin Durant, and Vanessa Hudgens have maintained memberships. Kourtney Kardashian, Kendall Jenner, Kylie Jenner, and Nick Jonas have also attended services there.

In 2019, Marvel star Chris Pratt received criticism after Elliot Page and others called him out for remaining a member and actively promoting the church in a talk show interview.

“His church is infamously anti-LGBTQ,” Page said at the time. He would further point out, “Being anti-LGBTQ is wrong, there aren’t two sides. The damage it causes is severe. Full stop.”

Pratt responded with an Instagram story saying “Nothing could be further from the truth,” claiming that he goes “to a church that opens their doors to absolutely everyone,” although he did not name Hillsong by name.

If you are a famous actor and you belong to an organization that hates a certain group of people, don’t be surprised if someone simply wonders why it’s not addressed. Being anti LGBTQ is wrong, there aren’t two sides. The damage it causes is severe. Full stop. Sending love to all

Last year, Hillsong fired Carl Lentz — the longtime lead pastor of their New York City church, and thus also pastor to many of the church’s stars — and his wife. Houston cited “a recent revelation of moral failures” including an extramarital affair. In May, a former Hillsong employee of Lentz accused him of repeatedly sexually assaulting her while she was working for the pastor.

This is a sign of a growing turn by the social network to actively collaborate and work with religious groups.

Nona Jones, a pastor who is Facebook’s head of partnerships in North America and faith globally, told the Times, “I just want people to know that Facebook is a place where, when they do feel discouraged or depressed or isolated, that they could go to Facebook and they could immediately connect with a group of people that care about them.”

This year, Facebook has tested a “prayer” feature in collaboration with Bobby Gruenewald, a pastor and the creator of YouVersion, the most popular Biblical mobile app. The Presbyterian Church U.S.A. became a “faith partner” with the site, although they have no ownership over any work produced from the partnership.

Leaders of member churches in The Church of God in Christ (COGIC) denomination have received “early access” on features that further monetize their Facebook presences. That includes revenue on streams, subscriptions for exclusive content, donation acceptance, and even in-video ads, all of which are either newly available or refined for easier navigation for churches.

These are the latest of many quiet moves Facebook has made to become a trusted partner in religious circles. Since launching their faith partnership operations in 2017, they have shared features and resources with The Potter’s House, T.D. Jakes’s megachurch, and the Assemblies of God, a Pentecostal denomination.

Theological observers, and even a member of the Assemblies of God leadership that worked with Facebook, expressed concerns about the social network working itself into religion.

“The technology has created in the lives of our people this quickness… The church is not Target,” Assemblies of God pastor and treasurer Wilfredo De Jesús said.

Facebook is still fresh from receiving criticism for refusing to take responsibility for the spread of disinformation on the network. Facebook’s own co-founder, Chris Hughes, who is out, has called the company out for allowing disinformation.

This week, the President called them out regarding disinformation around the coronavirus vaccines and the COVID-19 pandemic brewing on the website.

“They’re [Facebook] killing people,” Joe Biden said last week, before clarifying the comment but remaining steadfast in his concerns about the network’s influence in spreading disinformation.

Facebook’s new collaborator just made its position clear on the vaccine front as well this week. After a Hillsong church member died from COVID-19 after refusing to get vaccinated, Houston shrugged it off as “a personal decision for each individual.”

Facebook also has a storied history of censoring all kinds of content that is from, or ostensibly related to, LGBTQ people — although they have also been notoriously slow to remove anti-LGBTQ posts or accounts, even when they are promoting false information or hate speech.

“I don’t think we know yet all the ways in which this marriage between Big Tech and the church will play out,” Sarah Lane Ritchie, a theology lecturer at the University of Edinburgh in Scotland, said to the Times.