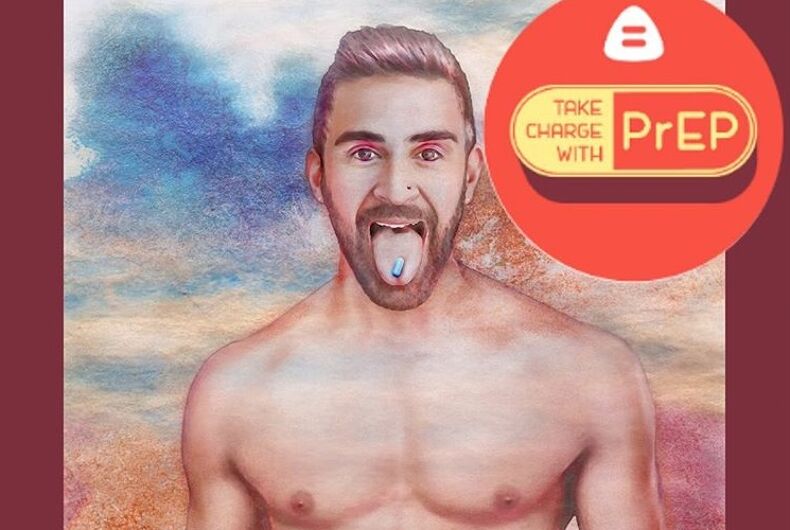 One of the ads that Instagram rejectedPhoto: Apicha CHC

Instagram is banning ads for PrEP directed at gay and bi men for being too political. The site is owned by Facebook, which has made it a matter of principle to accept political ads even if they’re untrue.

Apicha Community Health Center – a New York City health care provider that focuses on serving people of color, LGBTQ people, and people living with HIV – tried to place an ad campaign on Instagram to raise awareness about PrEP, the medication regimen that has been shown to be 99% effective in preventing the transmission of HIV if taken as directed.

But Apicha was told that they couldn’t place ads “about social issues, elections, or politics.”

“They said the copy was the problem but were unable to tell us what part of the copy was too political,” Apicha’s Phillip Miner told Vice. “It’s incredibly frustrating to encounter these sort of road blocks.”

The ads can be viewed on Apicha’s Instagram feed. It’s not clear what part is too political.

Miner said that social media platforms have rejected their ads before, but they usually cite policies on adult content. Twitter initially rejected this campaign for that reason, but Apicha appealed and got that decision reversed.

This comes just weeks after Facebook co-founder Mark Zuckerberg appeared before the House Financial Services Committee and was grilled about false statements in political ads that Facebook runs. Rep. Alexandria Ocasio-Cortez (D-NY) pressed him, asking why the social media platform accepts ads with completely false statements, and Zuckerberg said it’s because running such lies is necessary for democracy.

“In most cases, in a democracy, I believe that people should be able to see for themselves what politicians that they may or may not vote for are saying and judge their character for themselves,” he said.

Facebook also recently announced plans to work with news outlets to curate news that appears on the platform. One of those outlets is the far-right website Breitbart News, which is not known for being truthful in its reporting.

A few ads about PrEP, though, are too controversial for Instagram.

“I do see now more Asian faces in various campaigns, particularly in subway posters, train ads and in other venues in the city than before. Which definitely is important in a multicultural city like NYC.” Read our interview with the queer API NYC-based artists who created artwork that reflects their relationship with PrEP, stigma, & representation. Visit blog.apicha.org. #prepaware #prepawareweek Art by: @kuldeepsingh19

“When you search for #gayart on social media, it’s mostly topless or nude buff bearded white men. Sadly, APIs are far from it.” Read our interview with the queer API NYC-based artists who created artwork that reflects their relationship with PrEP, stigma, and representation. Read more at blog.apicha.org. #Prepaware #prepawareweek Art by: @migurrl

“What I remember is being raised in a way where if we didn’t talk about something, then it didn’t exist. And so I wonder if taking this pill challenges that way of thinking & uproots or subverts that denial.” Read our interview with queer API NYC-based artists who created artwork that reflects their relationship with PrEP, stigma, and representation. Visit blog.apicha.org. #PrEPAware #prepawareweek Art by: @marcoschinart