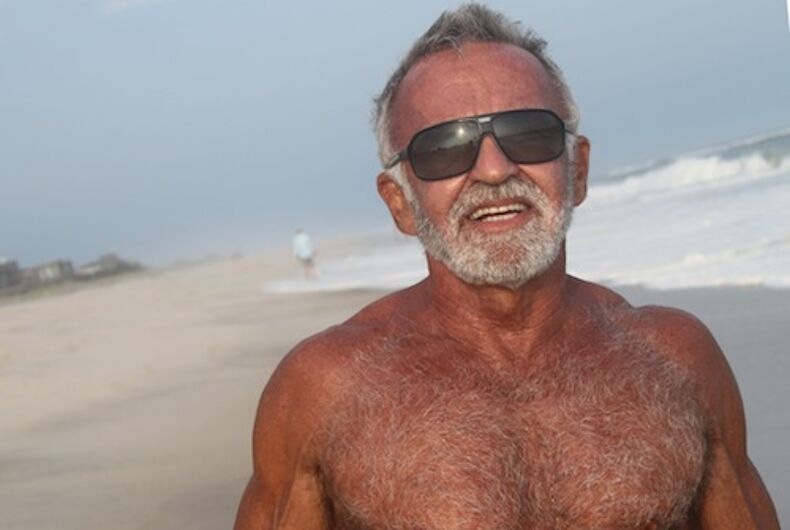 The shot that got Bianchi banned was called “Untitled, 457,” a picture from his collection entitled Fire Island Pines: Polaroids 1975-1983. The shot simply showed a naked man sitting on a bedside with his back to the camera. It showed the top of the man’s buttocks but was otherwise non-obscene. You can see the photo here. At the point of its deletion, it allegedly had over 5,000 likes.

In Bianchi’s defense, his husband Ben Smales wrote, “These corporations [like Instagram and Facebook] earn millions from our collective queer output and history, with Apple as their leader they now move to silence us.”

Bianchi’s banning isn’t necessarily surprising. The Facebook-owned photo-sharing platform has a habit of deleting supposedly risqué homoerotic content, including tasteful pictures of nude athletes, an image of Queer Eye food guy Antoni Porowski in his underwear and even a lovely image of a lesbian couple cuddling in bed with their child.

But Bianchi’s deletion is part of a trend of websites censoring photography that celebrates bodies and queer sexuality.

Recently, Tumblr committed a mass purge of all “adult content” in which it flagged tasteful images of shirtless men as inappropriate. The hook-up app Scruff recently announced its users can no longer post images of themselves in skimpy clothing. Craigslist closed its personals section last year and even Facebook has issued new guidelines forbidding users from discussing their sexual lives.

These incidents aren’t coincidence. They all follow the March 2018 passage of the so-calledStop Enabling Sex Traffickers Act and Fight Online Sex Trafficking Act (SESTA/FOSTA) in the U.S. Senate, a bipartisan-approved bill which holds online companies liable for any user-posted content that could possibly be seen as facilitating sex work.

In reality, SESTA/FOSTA has rolled back countless internet freedoms and inflicted devastating damage on already-marginalized communities, including many trans women of color who depend on sex work to survive….

SESTA and FOSTA are written in such vague terms that any website, app, or platform that seems to foster sexual meetups is put under scrutiny…. [but] not all explicit content is indicative of trafficking or misconduct.

Fearing SESTA/FOSTA, more sites and apps will be threatened to censor their content and the content their users upload, erasing queer people in the process.

It’s entirely likely that Instagram could reinstate Bianchi and apologize for its overreaction. But even if it does, it’s still part of a troubling trend that’s likely to worsen in the name of “protecting children.”

Of his own photographs documenting gay life on Fire Island, Bianchi has said:

Fire Island was, for me, a little utopia away from everything. It’s literally an island. And even for me, my photos were an idealization…Stonewall happened right before I got to New York and shortly before I started doing all of this at Fire Island. The image of the homosexual was that of degenerates working in shadows and perverts trying to seduce children. So healthy young American boys playing on the beach? Early game changer… Basically I saw myself as the supporter of and encourager of the whole gay consciousness that was emerging at that time in a very positive way…What’s special about it is remembering the affection that we all had for each other. We were all best buddies. We played together, we partied together, we adored each other. We danced with each other.