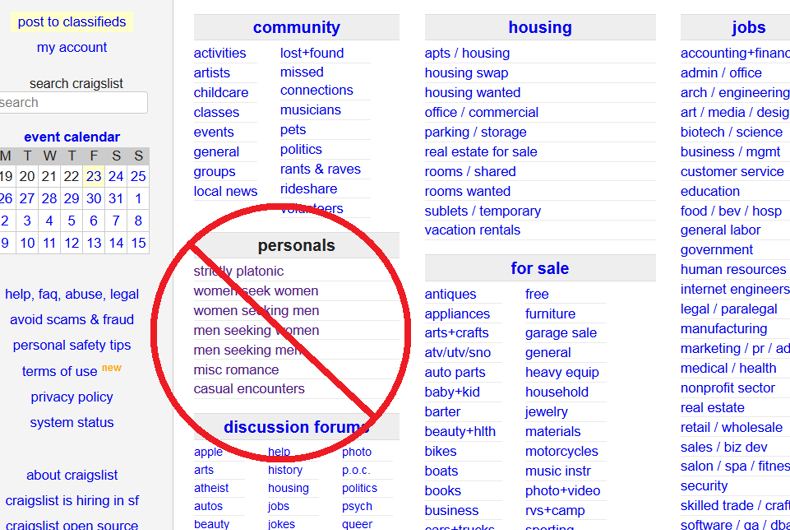 Users trying to access personal ads on Craigslist today were met with a message that said, “We are regretfully taking craigslist personals offline.”

The message refers to the passage of Fight Online Sex Trafficking Act (FOSTA) in the Senate earlier this week, a bill that will hold online companies liable for content posted by users.

Craigslist said that they cannot monitor the content of everything posted to their site, so they’re closing down the personals.

Any tool or service can be misused. We can’t take such risk without jeopardizing all our other services, so we are regretfully taking craigslist personals offline. Hopefully we can bring them back some day.

To the millions of spouses, partners, and couples who met through craigslist, we wish you every happiness!

Reddit also shut down part of its site after the passage of the FOSTA, and these sites are unlikely to be the last to do so.

LGBTQ people will be particularly affected. There is evidence that LGBTQ people are more likely to use the internet when looking for sex and love, which makes sense considering how geographically isolated many are.

The push for FOSTA goes back to 2016, when Carl Ferrer, the CEO of the online classified ad site Backpage, was arrested on charges related to sex trafficking. Prosecutors said that the site’s adult section was frequently used by sex traffickers, and that Backpage “knowingly and willingly allowed women and children to be exploited in return for its own financial gain.”

A judge dismissed the charges, citing the Communications Decency Act (CDA), which says that online companies can’t be held liable for the actions of users. “By enacting the CDA, Congress struck a balance in favor of free speech by providing for both a foreclosure from prosecution and an affirmative defense at trial for those who are deemed an internet service provider,” the judge wrote.

So the issue went to Congress, which wanted to show that it was doing something to fight sex trafficking.

FOSTA was initially opposed by internet companies because it’s hard to police the behavior of millions of users. When passage seemed inevitable, internet giants like Facebook and Twitter came around and accepted some slight changes in the bill’s language and supported it.

Gizmodo‘s Rhett Jones said that the big internet companies have the resources to deal with the fallout from FOSTA, which smaller companies don’t. “They’re able to turn to high-priced lawyers to stave off the lawsuits that will likely ensue. They’re also capable of implementing complex algorithms to monitor their services that a little guy wouldn’t necessarily have access to.”

The Electronic Freedom Foundation (EFF) also argued that the algorithms, which are unlikely to understand nuance, could silence many people who aren’t sex traffickers, including the victims of sexual assault.

“Online platforms would have no choice but to program their filters to err on the side of removal, silencing a lot of innocent voices in the process,” EFF’s Elliot Harmon wrote. “And remember, the first people silenced are likely to be trafficking victims themselves: it would be a huge technical challenge to build a filter that removes sex trafficking advertisements but doesn’t also censor a victim of trafficking telling her story or trying to find help.”

Craigslist’s founder Craig Newmark has not commented on the move.

Fox News commentator made a gay joke about Joe Biden