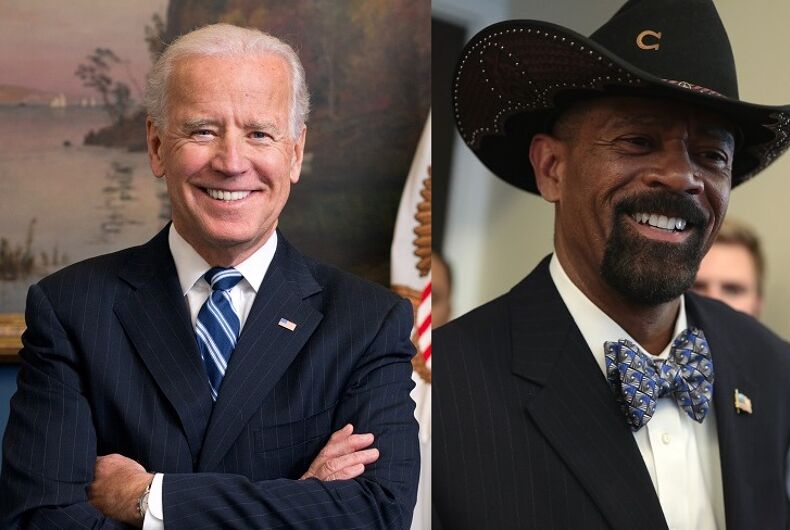 David Clarke, the former sheriff of Milwaukee County and a popular rightwing commentator, made a gay joke about former Vice President Joe Biden.

Biden has come under fire from the right following remarks he made this past Tuesday at the University of Miami. Biden discussed the infamous Access Hollywood tape in which Donald Trump admitted to sexually assaulting women.

“When a guy who ended up becoming our national leader said, ‘I can grab a woman anywhere and she likes it’ and then said, ‘I made a mistake,'” Biden said on Tuesday.

In 2016, Trump dismissed the criticism of the Access Hollywood tape by saying that he was engaged in “locker room talk.”

Biden disagreed that it was normal locker room behavior. “I’ve been in a lot of locker rooms my whole life. I’m a pretty damn good athlete.”

Clarke responded to Biden’s comments on Twitter with a gay joke that implied that Biden frequents locker rooms in order to have sex with men.

Really Joe? Please tell us why and what you were doing hanging around all those locker rooms, Joe? Did the soap keep falling out of your hands Joe? Huh? Tell us Joe.

JOE BIDEN: “I’VE BEEN IN A LOT OF LOCKER ROOMS IN MY LIFE.”
Really Joe? Please tell us why and what you were doing hanging around all those locker rooms, Joe? Taking in the sights? Did the soap keep falling out of your hands Joe? Huh? Tell us Joe. #MAGA. https://t.co/NbMVGH4qqB

Clarke was sheriff of Milwaukee County from 2002 to 2017. As sheriff, he came under fire in numerous incidents, including detaining someone because of a personal vendetta, proselytizing to employees, and taking money from citizens to buy exercise equipment.

In 2016, an inmate at the “>county jail died from dehydration when staff turned off water to his cell. Two women sued the county during his tenure, saying that they were shackled for hours while in labor, resulting the deaths of one of the newborns.

He is known for his far-right views, including describing Black Lives Matter as a “hate group” and calling Planned Parenthood “Planned Genocide.” His Twitter account was suspended earlier this year when he told his followers to “Punch them in the nose & MAKE THEM TASTE THEIR OWN BLOOD,” referring to the media.

Clarke is a frequent guest on Fox News, spoke at the 2016 Republican National Convention, and hosts a popular rightwing podcast.