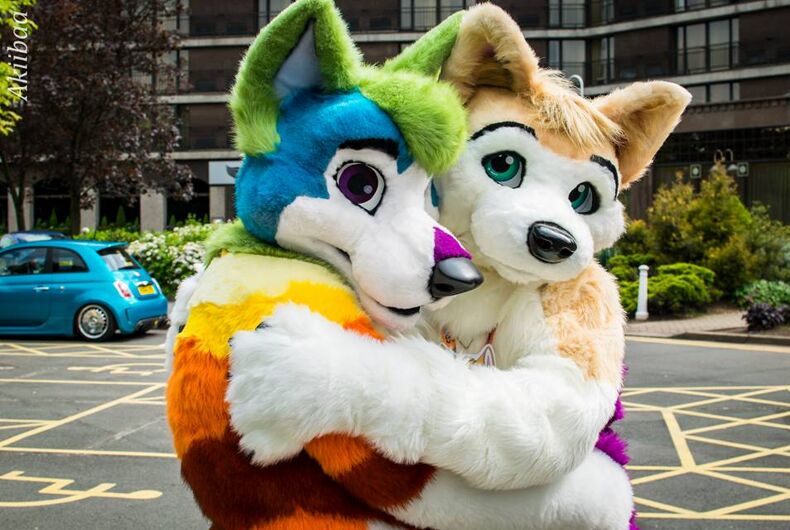 The Wolves of Odin is a far-right Canadian group that peddles Islamophobic immigration theories. Its members were caught earlier this year harassing Muslims and spying on the country’s oldest mosque.

In Grumpelt’s case, he filled WolvesOfOdin.ca with images of male-wolves with names like “Chocolate_Rain” and “Bigger_Woofer” posing seductively in tight shorts. Some furries worry that his site will stigmatize their kink, but Grumpelt says he meant no offense and wanted only to mock the Wolves of Odin.

On Grumpelt’s site are a link to a GoFundMe campaign raising funds to remove hateful local graffiti and an offer to sell the domain to anyone who makes a $10,000 donation to HateFreeYEG, an Alberta-based organization fighting the influence of right-wing hate groups in the city of Edmonton.

According to a report on antifa and alt-furries, antifa furries have convinced furry conventions like Anthro New England and Rocky Mountain Fur Con to “ban the use of the alt-right Furry Raider symbol (a Nazi-style red armband with a paw print instead of a swastika).” Many furries are also bi, trans or non-binary and support the LGBTQ rights movement.

In December 2018, e-sports video game champion Dominique McLean announced that he’s a gay furry who goes by “SonicFox.” At an award-acceptance speech, McLean declared, “I’m gay, black, a furry — pretty much everything a Republican hates.”