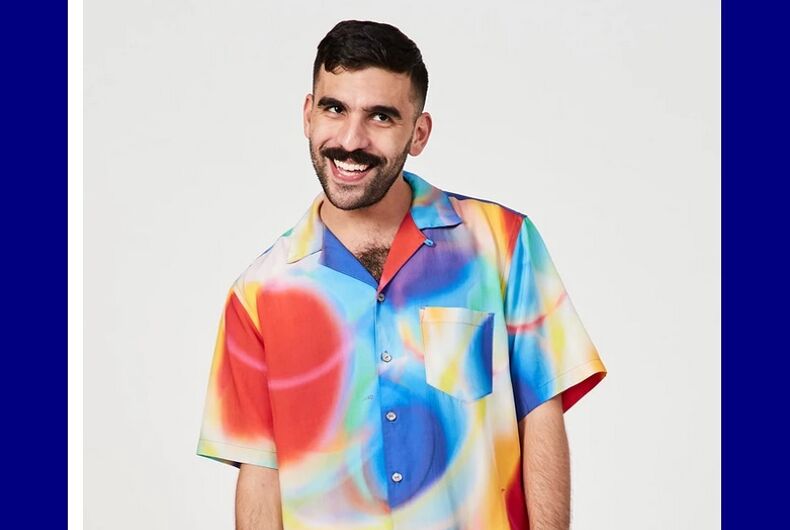 One queer-owned swimwear brand that focuses on body inclusivity has become the latest casualty in the Facebook’s clumsy move toward self-regulation.

When queer designer Daniel DuGoff launched his new swimwear brand in spring 2018, he did so with the idea of focusing on fun in the sun versus a romp in the sack. The line of apparel, HOMOCO, features brightly colored trunks and tees, many of which include cheeky messages about various popular gay destinations.

Related: Instagram rejected an ad for HIV meds because the topic is ‘too political’

“We’re talking about fun instead of sex, which is a huge marketing difference,” said DuGoff, who is based in Brooklyn. “Whereas other swim brands market through a sex or luxury world, we’re speaking more of a direct-to-consumer, internet-first language.” It’s one that emphasizes, body inclusivity, wide sizing, and affordable pricing, says the designer.

Given this deliberate de-empahsis on sex to market his clothes, DuGoff was surprised when he recently received a message from Facebook indicating that several ads for merchandise had been rejected because they had employed “profane, vulgar, or threatening language, or [that the ad] insults, harasses, or demeans people….”

The name of the brand, Homoco, might raise eybrows for some, but DuGoff borrowed it from a gas station chain his grandparents owned in Washington, D.C. Hommes Oil Company (HOMOCO) ran a series of gas stations in the 1930s in the nation’s capital. For the queer DuGoff, who has a queer sister and other queer relatives in the family, the name seemed like the perfect fit for his new company and a salute to the family that has supported his career over the last decade.

DuGoff admits that the name could be cause for some of the flags that have resulted in rejected ads, but that doesn’t square with the apparent arbitrary way that some of the ads have been blocked.

In Homoco’s case, the ads in question are “retargeting” ads. As DuGoff explains it, when a potential customer visits his site and clicks on, for example, a “red bottle bathing suit,” there is a cookie and a pixel that tells the social media platform that that user looked at that product. DuGoff’s e-commerce website then shows that user an ad for that product when they’re on Facebook.

“Basically every e-commerce platform does this, it’s the most basic kind of way ads are run,” said DuGoff.

As such, they are hugely important to marketers, especially in what is known as the “funnel of acquisition” of a customer. These types of ads are integral to persuading would-be buyers to click and purchase their products. Recently, DuGoff noticed that 15 of his 60 live products had gone unpublished on Facebook because of the flags.

After scrubbing his website for potential language violations and racy images, as well as copy re-writes, DuGoff says he was able to pare that initial figure of 15 down to 12.

Still, the designer says it’s just plain weird what is being targeted and what is not.

“The strangest thing is that our swim trunks are the one product we show the first image of as just a flat product image, not on a model.”

Homoco is currently in the midst of an appeals process with Facebook, but DuGoff is not very confident the issue will be sorted out before Black Friday, which is very important to brands like his own. Not even a representative from the company was able to figure out the problem, though he was only able to engage with that person via Facebook Messenger.

Even his own digital advertising firm has been stumped by Facebook’s rationales. The company acknowledges other platforms where they could advertise, but DuGoff has fostered a highly engaged community on Instagram, so it makes the most sense for the company to reach their customers where they already are.

“There’s a larger conversation about Facebook and truth here,” said DuGoff. “They [Facebook] control digital advertising, between them and Google, they’re the only real players.”

DuGoff for now is patiently waiting until the issue gets resolved, but his case raises larger issues about the tech giant’s ability to truly flag content that is actually harmful and that which is not. As Mark Zuckerberg moves his company closer toward straight-up censorship, LGBTQ-marketers will need to prepare for the platform’s inevitable stumbles along the way.

“We really go out of our way to not be vulgar and insensitive. Our whole brand is built around this mission that queer people deserve better,” said DuGoff. “It just feels like we’re not doing a good job when this is literally the point of the brand.”

Pete Buttigieg takes a solid lead in Iowa with 25% support