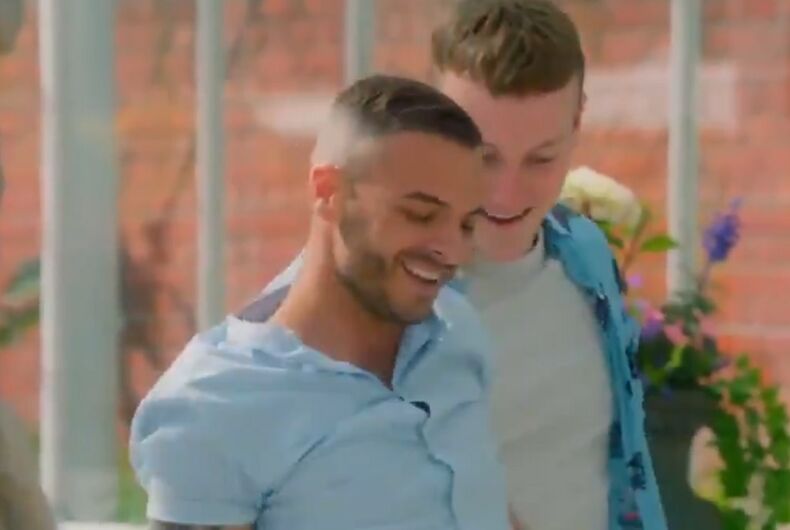 Ryan and Garry dancing on the showPhoto: Screenshot/Twitter

A video of two gay men on a date dancing as they meet for the first time has gone viral.

The dating and dancing show Flirty Dancing is in its second season on Channel 4 in the U.K. The show teaches two single people half of a dance routine that they perform when they meet each other for the first time, like a scene out of a romantic comedy.

The second episode of this season features two men meeting for the first time: Ryan and Garry.

Ryan, 25, is a wig assistant who says he has “no luck on dating apps.”

“There was one week where I had four dates planned and I got stood up on every one.”

Garry, 32, is a property manager from Scotland who is looking for a long-term relationship.

In the episode, choreographer Ashley Banjo taught Ryan and Garry a routine. Here are the results.

There’s a blind dating show where the couple are taught a dance separately and they perform it together when they meet for the first time 😭 IT’S SO BEAUTIFUL I’M IN BITS 😭😭😭 pic.twitter.com/K8uUiJLBPr

The video has been viewed over four million times on Twitter and liked over 130,000 times.

Omg the joy on their faces is so lovely!

How they be looking at each other like that and have only just met.. frk this is what live at first sight looks like 😭

look at how smiley they are 😭 pic.twitter.com/Z6UQbBFutl

As for Ryan and Garry, they have been on a second date and said that they feel so close already, it’s like they already knew each other.

Did Facebook reject these tame clothing ads from a gay company for being “vulgar”?

Dallas had a “straight pride” parade & only four people showed up. One of them attacked the others.