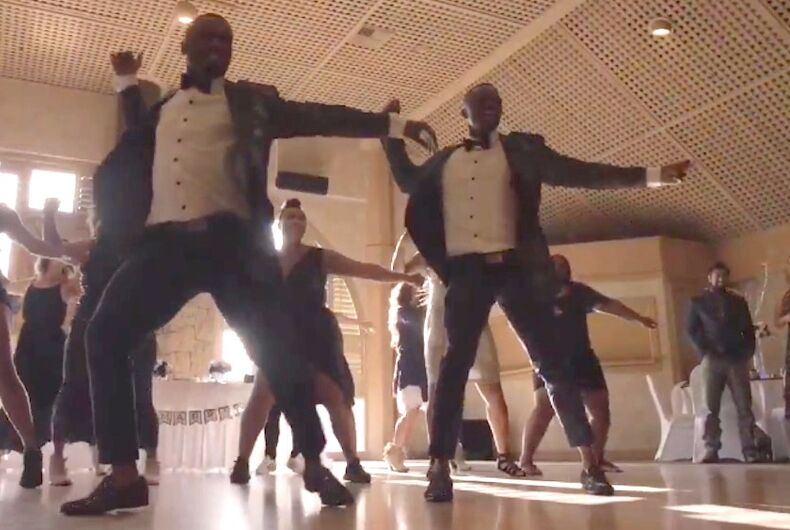 Newlywed husbands Isaiah and Taylor Green-Jones got hitched in Portland, Oregon, this summer and recently posted footage of their reception’s choreographed flash mob. It’s so joyous and on-point that you can’t but smile at their celebrating.

Taylor, who works as a dance instructor, worked with another dancer to help create a group dance routine. He, his groom, and their guests ended up performing a three-minute routine to a medley containing songs like Beyonce’s “Before I Let Go” and Lil Nas X’s “Old Town Road.”

Taylor told Good Morning America, “We’d always wanted to do a dance video, but had never made a routine.”

They and their guests practiced for a month before their big day. Including the Lil Nas X song was especially important to them “because it is sung by an openly gay black male artist,” Taylor said.

He added, “Everyone was surprised at the wedding. No one knew, so there was a lot of cheering, a lot of yelling. It was great.”

Here’s video of their routine:

“Online, there was a lot of support,” he said. “I think people felt inspired … because this video showed a little piece of light in the midst of a lot of negative energy out there.”

Tyler said that Isaiah popped the question on his birthday, September 28 of 2018, while the two were vacationing in Hawaii. Before then, the men had dated for about six years and had known each other for seven.

Tyler has posted lots of photos of he and Isaiah and their adventures together on his Instagram, along with pictures of their dogs, T’Challa and Kitana.

Here are more images from Tyler and Isaiah’s special day:

Ellen defends hanging out with George W. Bush despite his anti-gay legacy

The evolving activism of Damián Cabrera-Candelaria, a dedicated son of Puerto Rico