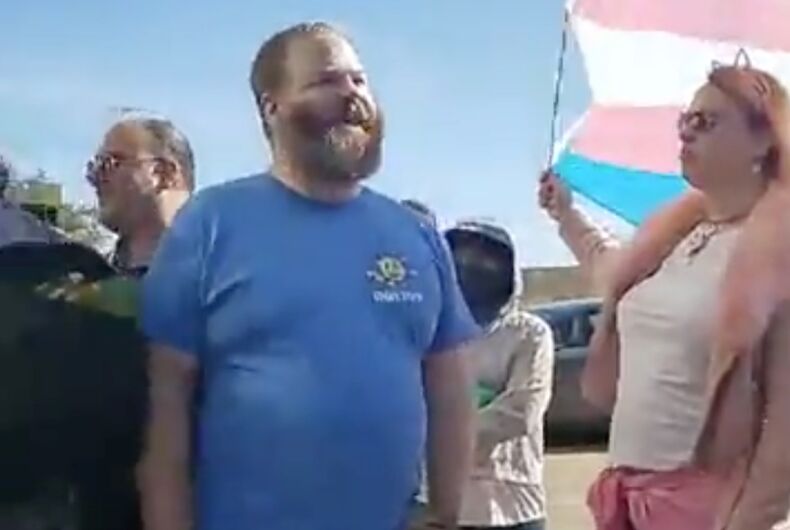 Two guys from Boston showed up in Dallas to celebrate “straight pride.” Even the local organizer didn’t bother to show up.

The Massachusetts group Super Happy Fun America made news recently for attempting to hold “straight pride” event in Boston. It also failed miserably. A similar event in California had 20 attendees.

Related: ‘Straight Pride’ organizer has a gay son. She says it’s ‘typical’ for gays to hate their parents.

A member of the hate group Dallas Proud Boys showed up during the event, as did “a woman named Princess Vanna who claims she converted from lesbianism after finding God,” according to local activist Soraya Colli.

“‘Princess Vanna’ claims she ‘rebuked’ them because she didn’t know what the event was really about and as a ‘Christian’ she doesn’t like ‘pride.’ She spent an hour proselytizing while the SHFA chumps livestreamed their non-event,” Colli tweeted.

The Dallas Voice reports that organizers scrapped plans for an actual parade after discovering they would have to pay the city a permit fee that cost approximately $12,000. When the organizers complained about it, saying the city was attempting to discriminate against them, Jayla Wilkerson, a city attorney and trans activist, surprised the men by telling them a march for trans rights also had to be canceled due to the cost of the permit.

One of the men claimed he was thrown out of his family’s home when they discovered he is straight. The other shouted anti-trans slurs at protestors.

One of Super Happy Fun America’s lead organizers, Mark Sahady, runs the Boston chapter of a small far-right group called Resist Marxism which traffics in anti-Semitism and white supremacism. Other organizers have ties to white supremacist and alt-right organizations too.

No violence was reported although two protestors had a shouting match with the men and were separated by the police.

Found all 3̶ TWO (🤣) of straight pride folks. Going over to say hi