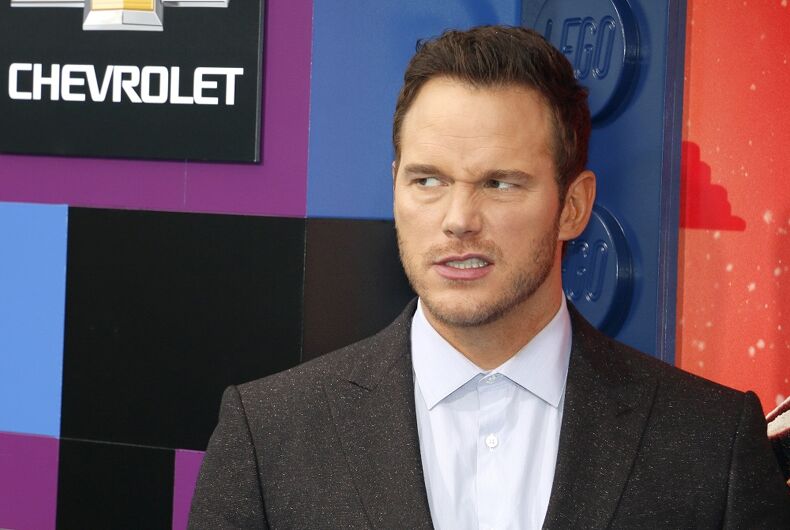 The Marvel Comics character Peter Quill has just been revealed to be bisexual. Will Chris Pratt – the actor who famously attends an anti-LGBTQ church – be able to effectively play the character?

Quill, also known as Star-Lord, is a protagonist in the series Guardians of the Galaxy. In the latest comic book volume – I Shall Make You a Star-Lord” – Quill is shown bathing with both a man and a woman.

“Time to accept the truth,” Quill tells them. “Morinus is my home. You’re my home.”

“Thanks for accepting me, guys.”

Then the three get closer.

No spoilers but #starlord aka Peter Quill was just confirmed Bi and I’ve never been happier???? #lgbt #bisexual pic.twitter.com/aRtmdRnk24

It’s not yet known if this development from the comic books will be taken into account in the films. Quill is played by Chris Pratt in the first two Guardians of the Galaxy movies, released in 2014 and 2017.

Pratt attends the Hillsong Church, a church popular with celebrities because it’s hip and has a world famous choir. Other stars like Justin Bieber, Nick Jonas, and Kendall Jenner have also been also church members.

But the church also say that it does “not affirm a gay lifestyle” and refuses to hire LGBTQ people. The church also has a history of supporting conversion therapy and gay congregants have come out to denounce the church’s hateful teachings.

“Gay people need to know that when they go to Hillsong, they have to go to the back of the bus,” one gay former congregant told The Daily Beast. “Hillsong is hip and attractive and contemporary, but there’s certainly nothing contemporary about what LGBT people will face if they want to be a leader in the church or offer themselves up for service. That’s something [Hillsong] will have to be upfront with, and they haven’t been so far.”

Pratt was called out last year for attending the anti-LGBTQ church by actor Elliot Page.

“Being anti LGBTQ is wrong, there aren’t two sides,” he tweeted at the time. “The damage it causes is severe. Full stop.”

If you are a famous actor and you belong to an organization that hates a certain group of people, don’t be surprised if someone simply wonders why it’s not addressed. Being anti LGBTQ is wrong, there aren’t two sides. The damage it causes is severe. Full stop. Sending love to all

Pratt responded on Instagram, saying that accusations that Hillsong is anti-LGBTQ “could not be further from the truth.”

“I go to a church that opens their doors to absolutely everyone,” he wrote.

“Hillsong Church welcomes ALL people but does not affirm all lifestyles,” church founder Brian Houston wrote in a blog post on the church’s website at the time. “Put clearly, we do not affirm a gay lifestyle and because of this we do not knowingly have actively gay people in positions of leadership, either paid or unpaid.”