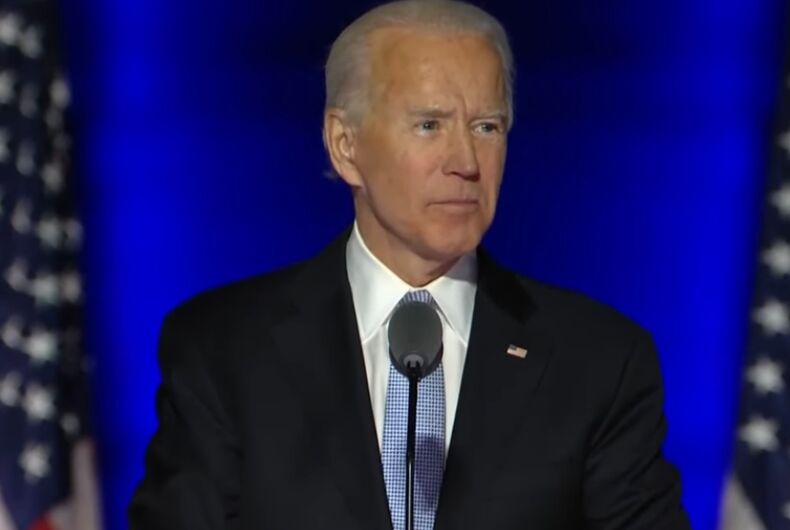 Let’s acknowledge, first, that Joe Biden will be assuming the presidency at one of the lowest points in American history. He will take office following a bloody insurrection incited by his predecessor during an uncontrolled pandemic and a fragile economy. Throw Trump’s impeachment into the mix, and you’ve got a pretty full slate of major priorities for Congress.

But, even with all of that, Biden should still keep his focus on getting significant legislative changes passed in the first 100 days of his presidency. One of them should be the Equality Act.

Related: Trump’s attempted coup requires a bold response from all of us

The Equality Act would prohibit discrimination based on sexual orientation and gender identity in employment, housing, public accommodations, jury service, education, federal programs and credit. Democrats have tried to pass the bill multiple times before.

The closest they came was in 2019, when the House passed the bill 236-173, with a handful of support from Republicans. From there it went to the Senate, where Majority Leader Mitch McConnell ensured it never came to the floor for a vote.

An earlier version of the bill, the Employment Non-Discrimination Act (ENDA), did come to the Senate floor for a vote in 2013, when Democrats controlled the chamber. In that vote, the bill passed 64-32, with bipartisan support. But at the time, Republican controlled the House, and then-speaker John Boehner didn’t allow the measure to come up for a vote.

Thanks to last week’s election of Jon Ossoff and Raphael Warnock as senators from Georgia, Democrats are now in control of both houses. Moreover, some of the same Senate Republicans who favored ENDA are still serving, including Lisa Murkowski, Susan Collins and Pat Toomey.

Moreover, the insurrection in Washington this week may have perversely given Biden a boost. Republicans are in disarray right now, and at least some of them are appropriately chastened by events. They may be willing to give Biden more leeway with his agenda than the full-on stonewalling they had been planning before the Georgia results came in.

During the campaign, Biden and his surrogates reassured folks that LGBTQ issues would end up on the back burner because of everything else the new president would be facing. In an interview with LGBTQ Nation, Reggie Greer, the Biden campaign’s LGBTQ outreach director, paraphrased a Biden quote from the second presidential debate: “We have to be able to walk and chew gum at the same time.”

Unlike some of the challenges the new administration faces, the Equality Act is relatively straightforward. History shows the votes are there. The bill is already written and ready to go. The Supreme Court has already ruled that employment discrimination based on sexual orientation or gender identity is illegal.

All that’s left is one last push from Biden and his allies in Congress. By spring, we’ll be able to assess just how good they are at walking and chewing gum at the same time.