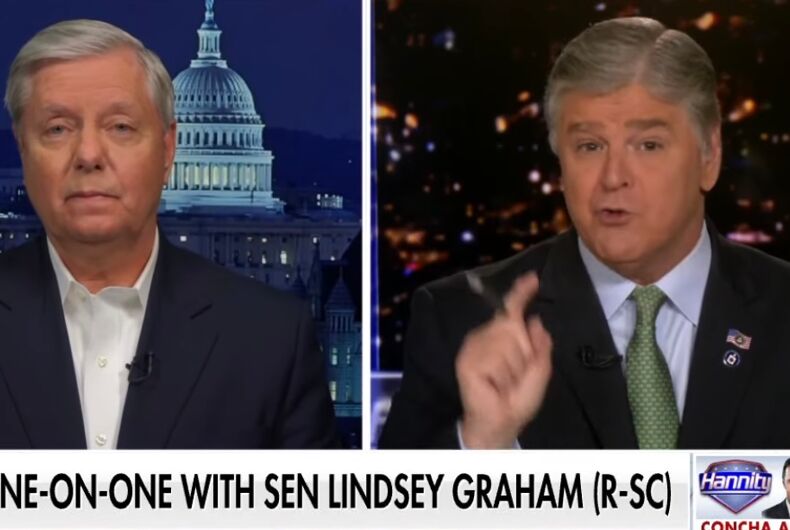 While Graham was protected by a share of police officers, they were outnumbered by the number of hecklers, who accused Graham of being a “traitor,” “liar,” and a “sex trafficker.”

On the night of January 6, following a pro-Trump mob storming the Capitol and leaving five dead, Graham disavowed President Trump from the marred floor of the Senate by saying, “count me out. Enough is enough.”

On January 8, hecklers found Graham at Ronald Reagan International Airport as he appeared to wait for a flight leaving the nation’s capital. In videos that went viral online, several try to berate Graham, who at first was on the phone but then hung up and engaged with the growing crowd. Soon, more police officers arrived and Graham was escorted from the location he was at, which didn’t dissuade the angry Trump supporters.

Among them was conservative political commentator Mindy Robinson, who started chants directed at Graham to “audit the vote.” Another bystander can be overheard calling Graham a sex trafficker and yelling that he’s protecting sex trafficking.

A source sends this video of a group of Trump supporters today harassing Sen. Lindsey Graham at Reagan airport and loudly calling him a “traitor” after he publicly broke with Trump earlier this week. pic.twitter.com/XBF8K6DIUD

Lindsey Graham reaping what he sowed at the DC airport rn pic.twitter.com/sJsoQgDx6X

Here’s the video of how it startedpic.twitter.com/Im7nI2BcBm

“You’re safe, Lindsey,” one of the hecklers said to him in a video from early on in the confrontation. “We won’t touch you,” another said.

Later, as Graham was being escorted away, one person in the crowd grabbed and hung onto his shoulder, with some commenting that the person appeared to have scratched the Senator.

When asked by a video-recording heckler, “Make a statement… why have you betrayed the American people,” Graham appears to laugh at the question. “You think that’s funny?” the person, mere feet in front of Graham and two of four officers protecting him, asks.

Graham responds, but his answer is not clearly audible. “You think you’re better than us?” the person recording asks.

In Robinson’s video, she can be heard saying, “Lindsey Graham, you are a traitor to the country. You know it was rigged!

“…You garbage human being. It’s going to be like this forever, wherever you go, for the rest of your life,” Robinson continued. “Hope you enjoy Gitmo!”

Meanwhile, another heckler asks him, “you like little kids there, Lindsey?” suggesting that he is a child sex abuser, a common tenet of the ongoing QAnon conspiracy, which believes Trump is being targeted by a secret society of Satan-worshipping government officials and celebrities.

According to Politico, one maskless QAnon supporter tells Graham, ““One day [you] will not be able to walk down the street. It is today.” She wore a “I love Trump” shirt with the letter “Q” on the back.

Other hecklers called him a “pedophile,” tell him, “this is the rest of your life,” and ask Graham, “what happened to your oath?” while he looks at his phone.

After all of that, Graham went back on the defense for Trump. He called out Twitter for banning the President, and as the growing threat of another impeachment trial for Trump began growing, Graham challenged Democrats to stop even contemplating it.

Graham even made an appearance on Fox News’ Hannity. While host Sean Hannity ranted conspiracy claims about Hunter Biden, election fraud, and Joe Biden, a gleamy-eyed Graham quietly repeats that he’s “calling on President-elect Biden to pick up the phone” and call House Speaker Nancy Pelosi, soon-to-be Senate Majority Leader Chuck Schumer, “…and ‘The Squad’ to end the second impeachment.”

Graham even claims that “I’ve been with him most of the day,” referring to Trump.

“First, I want to thank the police for coming to my aid,” he whispers. “I know people are frustrated.”

"I'm calling on President-elect Biden to pick up the phone to call Nancy Pelosi and the Squad to end the second impeachment" — Lindsey Graham, who says he was with Trump today, just went on Hannity for an interview that had a hostage video quality pic.twitter.com/yx9IrXCVqZ

President Trump moved the country in the right direction last night with his statement. The radical liberal Democrats’ never-ending desire to keep the conflict going needs to be addressed by President-elect Biden.