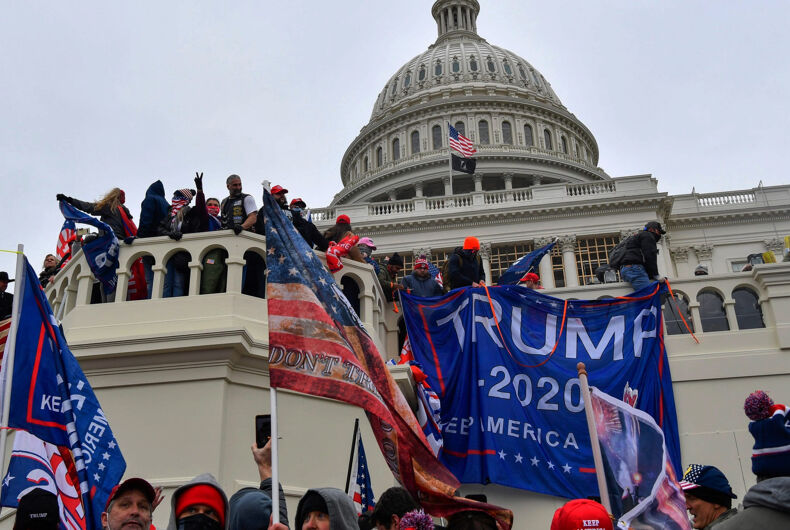 Trump supporters staging a "takeover" of the U.S. CapitolPhoto: Shutterstock

The riots inside of the United States Capitol last night shocked the world — especially as millions watched the breaking and entering live on television and online.

Once the events of January 6, 2021 unraveled, many took to Donald Trump’s favorite platform — Twitter — to condemn him and his supporters. Meanwhile, Trump himself would defend the actions of the rioters, denounce his own Vice President, and received a suspension from Twitter for 12 hours.

Celebrities, political figures, and LGBTQ people expressed their shock, anger and dismay as anti-democratic rioters took the Senate floor, put their feet up on House Speaker Nancy Pelosi’s desk, and destroyed a building that hadn’t physically come under attack since 1814, when the British invaded Washington, D.C.

This is the America that Fox News, Facebook, and most Republicans in Congress have brought us https://t.co/sq9DMOeYzA

So… there terrorists are just calmly wandering around the senate chamber without… resistance? Must be nice.

Why is everyone saying they’re shocked by this?. This is not shocking. This was inevitable. No one should be shocked or surprised.

trea·son:
the crime of betraying one's country, especially by attempting to kill the sovereign or overthrow the government.

No matter what happens tonight, I just want Mitch McConnell to know that I hate him. ❤️

Replacing an American flag with a Trump flag. This was an attempted coup. pic.twitter.com/xIGmyQBEt5

Why are these Nazi fucks flying our 🏳️‍🌈 flag? https://t.co/70f1egiiPY

Many of the legislators, both those who were inside the building when the attack started and those who were not, immediately condemned the violence. Political figures around the world, on all sides of the political spectrum, did so as well.

What we’ve seen today is beyond the pale.

This is a last gasp for Donald Trump and his Republican co-conspirators in Congress.

By a 93-6 vote, the United States Senate has identified its six worst members.

The U.S. Capitol is on lockdown, I am safe. But I cannot believe that it has gotten to this point, my heart breaks for our country today. Trump has enabled this behavior by peddling conspiracies and lies and incited violence. Every one of my Republican colleagues must condemn it.

This is outrageous, and the president caused it. We should impeach and convict him tomorrow.

Even those that are accused of bearing responsibility for the events — either by supporting conspiracy theories on the floor of Congress, or enabling President Trump with once-unwavering support — condemned the violence that took place in Trump’s name and tried to distance themselves as much as possible.

Those who made this attack on our government need to be identified and prosecuted to the fullest extent of the law.

Their actions are repugnant to democracy.

Thank you to the brave law enforcement officials who have put their lives on the line. The violence must end, those who attacked police and broke the law must be prosecuted, and Congress must get back to work and finish its job

The attack at the Capitol was a despicable act of terrorism and a shocking assault on our democratic system. We must come together and put this anger and division behind us. We must, and I am confident we will, have a peaceful and orderly transition of power. My full statement: pic.twitter.com/84HHQdpMZd

The thugs who stormed the Capitol yesterday need to be arrested and prosecuted.

If you saw something or have any information about yesterday’s attack, please contact the authorities.https://t.co/ClTNmb2fyl

Use the video footage, identify every person committing violence – and arrest and prosecute them.

This is completely unacceptable.

Only Trump loyalists, such as the Log Cabin Republicans, have dragged their feet.

Some conservatives have already begun trying to whitewash history, such as George Santos, the gay Republican who claimed just this week he was “stoned & egged” from his home just after attending a Trump family event at Mar-A-Lago.

I’m proud of the hundreds of thousand of patriots who came to DC today to support our president peacefully. Although a small group thought it was appropriate to disturb the process, they do not speak or represent the majority of us. #StaySafe #USA #USCapitol

I’m searching for the correct words to describe how I feel about yesterday, It’s not very often that I am left speechless. #PrayForAmerica #unity

One faction of the Log Cabin group even voiced their support for the rioters, calling them “protestors” and comparing them to demonstrations held in opposition to Justice Brett Kavanaugh’s confirmation, where no one was hurt and no property was destroyed.

Remember when the liberal media like @MSNBC praised protests at the Capitol? https://t.co/LQM8GkdxB3

Mike Pence denounced the violence yesterday while defying Trump’s wishes for him to somehow not certify the count — all while Trump sat in the White House, unable to tweet, as resignations and calls for impeachment began to pile up.

This massive backpedaling from Republicans is actually more insulting. They don’t deserve credit for shit. They have been complicit for four years, and kissed Trump’s ass at every turn. It took an insurrection that killed somebody for them to show some basic decency. Fuck. Off.

All it took was an insurrection. https://t.co/pBPBVW1g79

In the end, the rioters only delayed the rightful election certification they sought to prevent, and Joe Biden and Kamala Harris are set to become president and vice president, respectively.

Fourteen hours and one violent insurrection later, I voted to certify the results of the Presidential election.

Tomorrow, the fight for democracy begins anew. Tonight, I’m going to get some sleep.

Trump will not stop this attack on our Democracy. He continues to encourage it. Everyone in Congress should put country over party and condemn Trump for starting this attack. Let's stop it by getting back to our job of accepting the election that Trump clearly lost and Biden won.

At 3:40 am ET, Congress certified the Electoral College votes.

And I should add @KamalaHarris. My apologies. https://t.co/jsK1WpOCsY