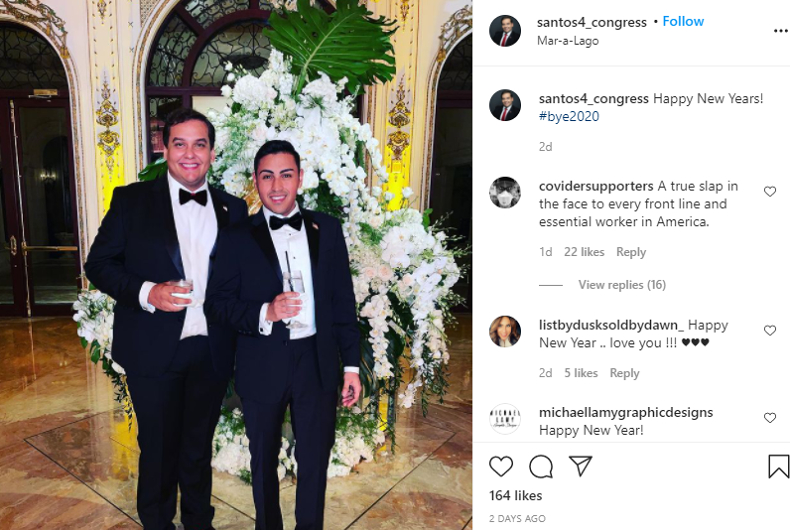 Congressional hopeful George Santos (left) and his fiancé (right) at the Mar-A-Lago New Year's event, as shared on InstagramPhoto: Screenshot

Out Republican candidate George Santos – who lost his bid to represent New York’s 3rd Congressional District in Congress last November – is claiming that he and his fiance have been the victims of “violence” since he posted pictures of them attending a maskless New Year’s Eve party at Donald Trump’s Mar-a-Lago resort in Florida.

Santos traveled from New York City to Palm Beach, Florida for the New Year’s event with his fiance and then posted about it on the Instagram account he created for his campaign. The New York Times reported on his Instagram posts and then he complained about the public knowing what he and his fiance did.

He also said that his fiance was fired from his job as a pharmacist – presumably because his employer didn’t want to expose sick people to someone who so publicly flouted coronavirus prevention guidelines – and claimed they had to leave their home with their four dogs because of “the violence against us.”

My fiancé & I had to leave our home this evening with our 4 dogs thanks to the @nytimes publishing of my Instagram showing me attending the #MarALago New Year’s Eve party. My fiancé a pharmacist who worked 12h/7days shifts for 9 months was fired! The violence against us is real.

This week, he clarified what he was referring to and decried the “thousands of violent threats” that he and his fiance received.

Many have argued we made a poor choice of attending a NYE party, I can respect that. However the violence that was triggered from that is truly inexcusable. With thousands of violent threats received, we are weighting our options.
what ever happened to respect?#EnoughIsEnough

“People get to stone and egg my house and I must go down quietly?” he wrote in a later tweet. “I never in my life committed an act of violence against anyone. This is absolutely abhorrent to say the least, if I roll over now I’ll be trampled.”

People get to stone and egg my house and I must go down quietly? I never in my life committed an act of violence against anyone. This is absolutely abhorrent to say the least, if I roll over now I’ll be trampled. I respect everyone and deserve that in return.

He reiterated that he believes that he and his fiance “did nothing wrong” by attending a party without masks 1,200 miles from his hometown and that they “owe no one an apology.”

“We are the ones being threatened for our freedom to make our own choices,” he said. “I will stand my ground and will NEVER back down.
America is a FREE country!”

My fiancé and I owe no one an apology, we did nothing wrong.
We are the ones being threatened for our freedom to make our own choices. I will stand my ground and will NEVER back down.
America is a FREE country! #LandOfTheFree & #HomeOfTheBrave

In his 2020 Congressional bid, Santos presented himself as a far-right choice in the district that includes most of the North Shore of Long Island with a platform that included ending bail reform, increased funding for the police, less gun control, partial privatization of Social Security, and building a wall between Mexico and the U.S. His website says he supports marriage equality.

In October, he appeared on the local news as a gay Trump supporter, saying, “I think that this president has done more for the community than his predecessors.”

If he had been elected, Santos would have been the first out LGBTQ Republican elected to the U.S. House of Representatives.

Today, Santos is urging his supporters to vote for the anti-LGBTQ Sen. Kelly Loeffler (R-GA) in the Senate runoff elections in Georgia.

Georgians today our countries faith and future is in your hands. #GetOutAndVote @KLoeffler @Perduesenate to save America.

Santos is tweeting from Washington DC as he continues his cross-country tour during a pandemic. The District requires anyone traveling from Florida or New York to provide proof of a recent negative coronavirus test and that they are retested within 3-5 days of arrival. It also requires all visitors to wear masks.