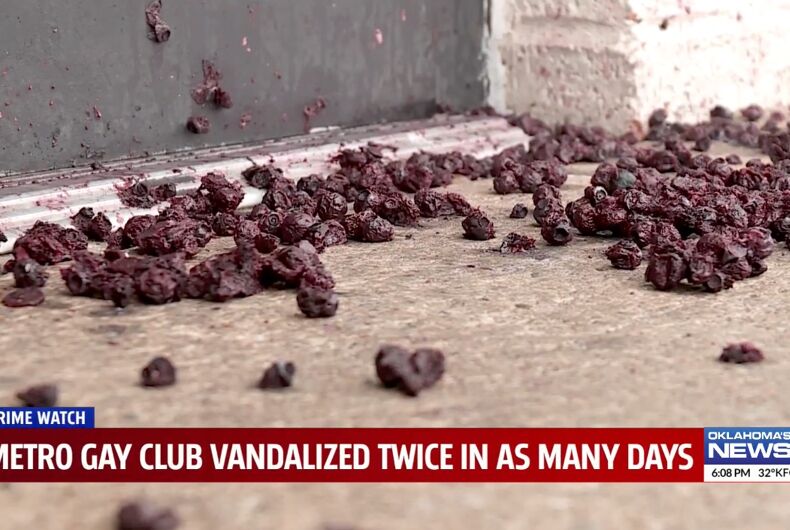 Blueberries were strewn in front of the entrance to a gay bar in Oklahoma.Photo: Screenshot

Partners, a gay bar in Oklahoma City, Oklahoma, has been vandalized two nights in a row by an unknown assailant.

The bizarre incidents haven’t caused any real damage — because the culprit’s tool of choice has been food. Specifically, blueberries and soup.

Related: “I ❤️JK Rowling” billboard vandalized & removed hours after it went up

The first night of the food fight, owner John McAffrey told local news that employees discovered that someone had dumped soup all over one of the vehicles in the parking lot.

But the next night, the perpetrator decided to take things up a notch. They dumped blueberries in front of the bar’s entrance and smeared someone on the door.

“We first thought somebody got sick and then once we got closer, we realized that… it looks like blueberries,” McAffrey told the station.

He says the vandal was caught on video dumping the produce, but he didn’t want to share it until he had spoken to an attorney. He did say that the person was driving an older model Chevy Silverado.

“They pull up, throw it out the window, slow down for probably like ten seconds,” McAffrey said.

A breathless account of the smooshed berries by a local reporter was mostly met with a giant shrug online.

“I mean we’ve been through worse,” one Twitter user commented.

“Who the fuck throws blueberries?” another asked.