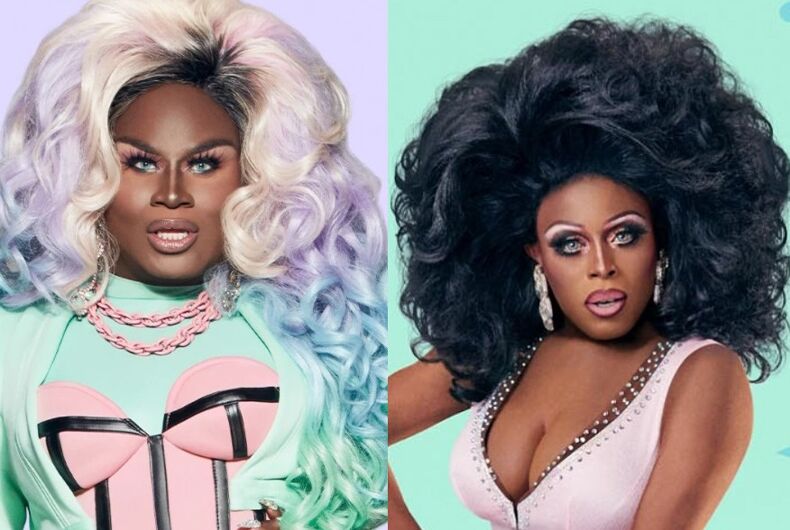 Two contestants on this year’s season of RuPaul’s Drag Race spoke out about the importance of voting in today’s Senate runoff elections in Georgia.

“Just going through the last four years,” said drag queen Tamisha Iman in an interview with GLAAD, calling out the Trump administration for rolling back LGBTQ rights, “we always stand on other shoulders, where people have fought to actually obtain for us to be who we are today being stripped piece by piece, brick by brick.”

Related: Joe Biden would have lost the election if not for LGBTQ voters according to new analysis

This past November, Georgia held elections for both its seats in the U.S. Senate after one of the state’s senators retired prematurely.

No candidate in either election got over 50% of the vote in November, so that state’s laws require a runoff election between the top two candidates in each election: Sen. Kelly Loeffler (R) against Rev. Raphael Warnock (D) in one race, and Sen. David Perdue (R) against Jon Ossoff (D) in the other race.

Democrats control 48 seats in the Senate and Republicans have 50. If Democrats win both of the runoff elections, they’ll control 50 seats, and ties will be broken by Vice President-elect Kamala Harris. Democrats will already control the House of Representatives and the White House, which means that today’s elections will determine whether Republicans can block Democrats from passing any legislation for the next two years.

So two Georgia drag queens who are on the cast of season 13 of RuPaul’s Drag Race – Tamisha Iman and LaLa Ri – are trying to rally LGBTQ people to vote in today’s election.

“I’m a Black person,” Iman said. “So as a Black drag queen, it is very important that our voices be heard as well.”

“We are much more as one than we are as individuals. So to get the rights and to get back on the right path to making this country acceptable for all of us, we have to vote. Our voice is our vote. We have to get out there and continue to fight so everybody will experience equality.”

“I’m an advocate in my city, I’m one of the pillars of the community, and I’m always fighting for fairness and everybody’s rights. So it is very important. If you don’t vote, you don’t count.”

Data from two separate polls suggest that Georgia would have gone to Donald Trump instead of Joe Biden this past November if not for LGBTQ voters. One of those polls showed that Georgia has a large LGBTQ population who overwhelmingly vote Democratic.

“Our lives depend on it. Point blank and a period. I made sure that I early voted,” Ri said. “Our lives literally depend on it, so go out and vote, honey! Vote if you can! Vote for your lives!”