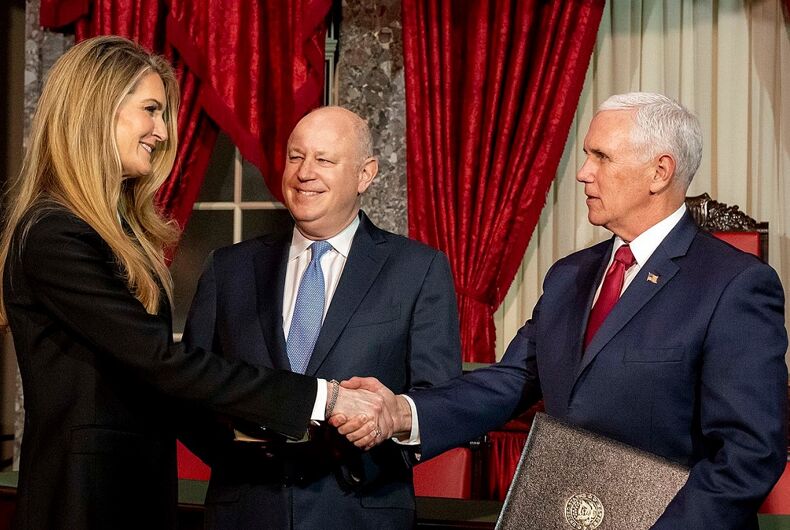 Sen. Kelly Loeffler (R-GA) is fighting to retain her seat in a special runoff election against Reverend Raphael Warnock, but now she’s facing blowback over her congressional salary.

She is one of the wealthiest people in Congress and pledged to donate her $174,000 salary to Georgia charities. Now it’s been revealed that she’s been giving it to a particularly ugly anti-LGBTQ group and “pregnancy centers” meant to discourage women from having abortions.

Covenant Care Adoptions is a nonprofit adoption and counseling agency that compares loving gay relationships to bestiality and refuses to work with LGBTQ people.

“The term ‘marriage’ has only one meaning: the uniting of one man and one woman in a single, exclusive union,” the group’s Statement of Faith reads. All prospective clients must agree with the statement and “share these beliefs.”

It adds that “any form of sexual immorality (including… homosexual behavior, bisexual conduct, bestiality, incest, and use of pornography) is sinful and offensive to God.”

The statement also attacks transgender people, saying, “Rejection of one’s biological sex is a rejection of the image of God within that person.”

Last September, Loeffler sponsored a bill to ban trans girls from school sports. The bill, which served to signal Loeffler’s allegiance to the Trump base, could be interpreted to require genital exams for girls who want to compete in school sports. The irony is that Loeffler is the co-owner of Atlanta’s WNBA franchise, whose players have organized for her opponent, Warnock. The lead organizer for the players is a lesbian.

One of the anti-abortion groups Loeffler is funding opposes contraception and tells clients to be abstinent or use the “rhythm method” of only having sex when the woman isn’t ovulating. Even if a person keeps good track of their ovulation cycle, it is still not a very effective method of birth control.

The group also says that it offers an “abortion pill reversal” despite any lack of scientific evidence that it works.

Rev. Warnock has a long track record in support of LGBTQ people. As the senior pastor of Ebenezer Baptist Church, the church where Martin Luther King Jr. was pastor, he has carried on King’s tradition of advocating civil rights, while including the LGBTQ community.

After the Pulse nightclub massacre in 2016, Warnock noted how anti-LGBTQ rhetoric contributes to hate crimes. “This is a time to grieve, to mourn, and to consider what it means to stigmatize people,” Warnock said. “Religious communities have played a particular role in… marginalizing gay and lesbian and transgender people.”

Hero teacher brought to tears after winning a free new car. Her wife nominated her for the honor.