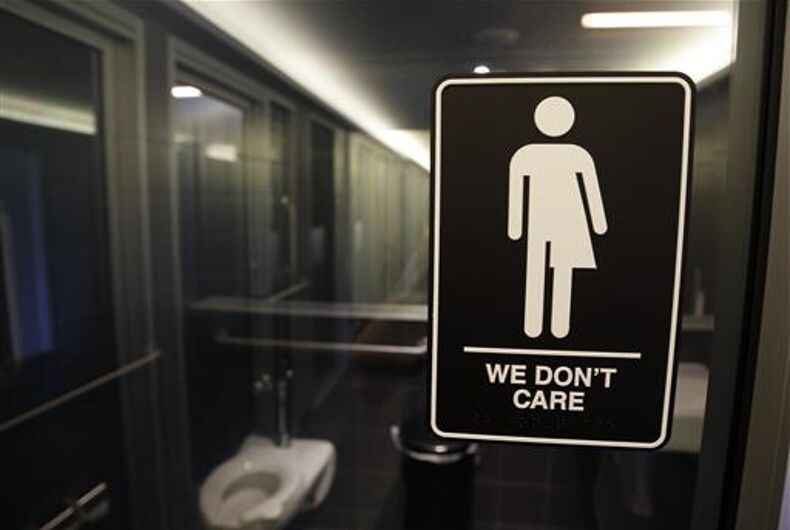 In this Thursday, May 12, 2016 file photo, signage is seen outside a restroom at 21c Museum Hotel in Durham, N.C. Ten states sued the federal government Friday, July 8, 2016 over rules requiring public schools to allow transgender students to use restrooms conforming to their gender identity, joining a dozen other states in the latest fight over LGBT rights. Photo: AP/Gerry Broome

North Carolina’s controversial law that banned transgender people from the correct restroom and forbade municipalities from enacting LGBTQ nondiscrimination ordinances has finally expired. The law went into effect in 2016, but a 2017 compromise with newly elected Democratic Gov. Roy Cooper repealed the bathroom ban, but left in place the moratorium on nondiscrimination ordinances that went further than state law.

The state, long dominated by the Republican party, does not have any protections for LGBTQ people, but local governments had already passed a few with more on the way when the law was passed. Nondiscrimination ordinances that had already been passed were nullified by the law.

“We can finally begin writing a new chapter for LGBTQ North Carolinians, one where no one is left vulnerable to discrimination based on who they are or who they love,” Allison Scott, policy director for the Campaign for Southern Equality, said.

“I’m relieved that we’ve dismantled this barrier to equality, and now, we can continue to push forward by passing local LGBTQ protections, advocating for full repeal of discriminatory laws, and calling on state and federal lawmakers to pass LGBTQ protections,” they added.

Beau Mills, executive director of the North Carolina Metro Mayors Coalition, told The News and Observer that while he doesn’t know of any cities who will pull the trigger before the end of the year. “I am aware that cities, some municipalities, are certainly looking at it.”

Former Republican governor Pat McCrory, who led the state when the original law was enacted and was voted out of office following a national outcry, endorsed the compromise with his successor because it wasn’t a “full repeal.”

“Now, we reset back to what the laws were before the Charlotte ordinance was passed a year ago, when things were working just fine in our state,” he said at the time.

The city’s ordinance extended nondiscrimination protections to LGBTQ people and Republican state legislators moved quickly to cancel it using some of the most venomous language and blatant prejudice to defend the decision.

Several major sporting events, concerts, and movie productions were canceled in the wake of the original law’s passage. The blatant attack on the LGBTQ community caused the state millions of dollars in development and tourism dollars.

Meet the trans entrepreneur who is queering the fashion industry