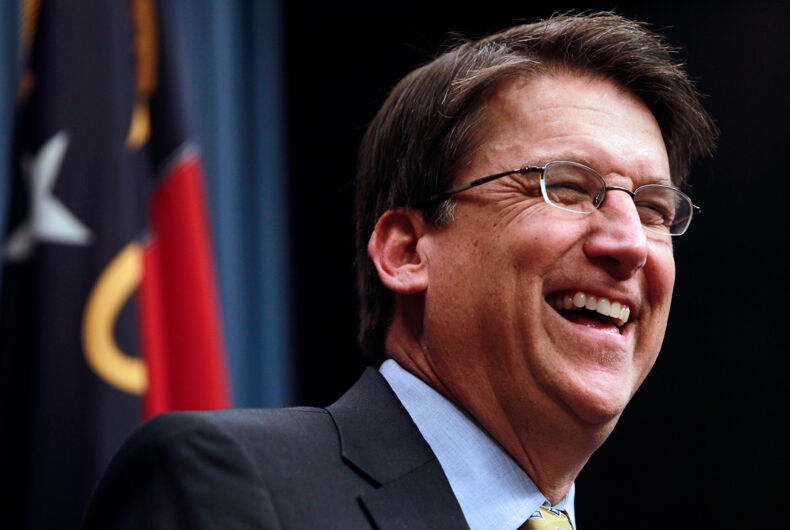 Add to those voices denouncing North Carolina’s House Bill 142 law as less than a full repeal of House Bill 2: former Gov. Pat McCrory, who personally supported the measure prior to last week’s vote.

“The good news is this: the HRC lost the battle,” McCrory told far right Christian conservative Tony Perkins, head of the Family Research Council, which the Southern Poverty Law Center has labeled an extremist hate group. Perkins hosts Washington Watch, a radio show for FRC heard nationwide on more than two hundred stations, and the disgraced ex-governor was his guest.

“With their resources and power and money, and their trying to get some other corporations to help support them in the battle…(The) fact of the matter is, they did not get a full repeal of HB2.”

McCrory again blamed Charlotte for enacting pro-LGBTQ protections from discrimination for the HB2 debacle, in another radio interview.

“Now, we reset back to what the laws were before the Charlotte ordinance was passed a year ago, when things were working just fine in our state,” McCrory told WBT. “Hopefully, we’ll get back to the priorities…we need to be working on: Safety of citizens, good roads, good education.”

And to the Charlotte Observer, McCrory had this spin on his HRC bashing:

“What I’m saying is that I supported the compromise, and the HRC did not,” he said. “And I’m not the only one saying it wasn’t a full repeal. That’s what a compromise is.”

No, the census is not really erasing LGBTQ people