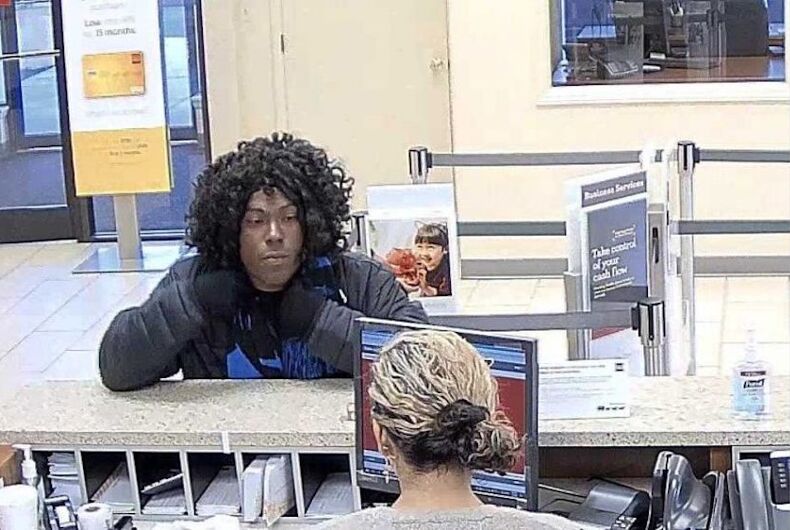 The FBI is seeking the "Bad Wig Bandit" for a series of North Carolina bank robberiesPhoto: Video screenshot

The FBI is seeking public help to track down the “Bad Wig Bandit,” a person who has worn comically horrid wigs while robbing three different banks in the area of Charlotte, North Carolina.

Authorities say that they robbed a BB&T bank in Huntersville, North Carolina on December 13, 2019 and then two banks — a New Horizon bank in Belmont and a Wells Fargo bank in Gastonia — on January 8, 2020. During the first robbery, the suspect wore a blonde wig and high heels. In the second robbery, they wore a long red wig under a hoodie, and during the third, they wore a curly black wig.

Related: The last members of that Grindr robbery gang are going to prison for a really long time

While authorities didn’t disclose the amount of money taken from the banks, they believe the Bad Wig Bandit is a black male in their 20s or 30s with a medium build. Anyone with information is encouraged to leave information at tips.fbi.gov or to call the Charlotte FBI office at (704) 672-6100.

Here is a video showing the awful hairdos worn by the Bad Wig Bandit. Local news has identified the suspect as a man, although it does not appear that anyone has confirmed their gender identity.

Here is a tweet from the FBI containing a wanted poster for the Bad Wig Bandit:

Do you recognize this suspect? The Bad Wig Bandit is believed to have robbed 3 banks in 3 weeks in NC. @GPDNC @HPDNC #BelmontPolice pic.twitter.com/A0duwj4JrK

This person’s unfortunate use of wigs could be used to cast transgender and other gender non-conforming people in a bad light. North Carolina’s anti-LGBTQ conservatives already used the state’s infamous bathroom bill to demonize trans and non-binary individuals as “men dressing up as women” seeking to commit opportunistic sex crimes against the innocent.

In 2016, North Carolina passed the infamous House Bill 2 (HB2), which, among other things, forced transgender people to use the bathroom associated with the gender on their birth certificates.

HB2 led to a national outcry and was replaced in 2017 with HB142, which LGBTQ activists called a “fake repeal.” HB142, though, was effective in rehabilitating the state’s reputation.

HB142 repealed the birth certificate requirement found in HB2, but it left regulation of public restrooms to the state legislature and didn’t specify what the rules would be going forward.

Sen. Cory Booker drops out of the Democratic primary