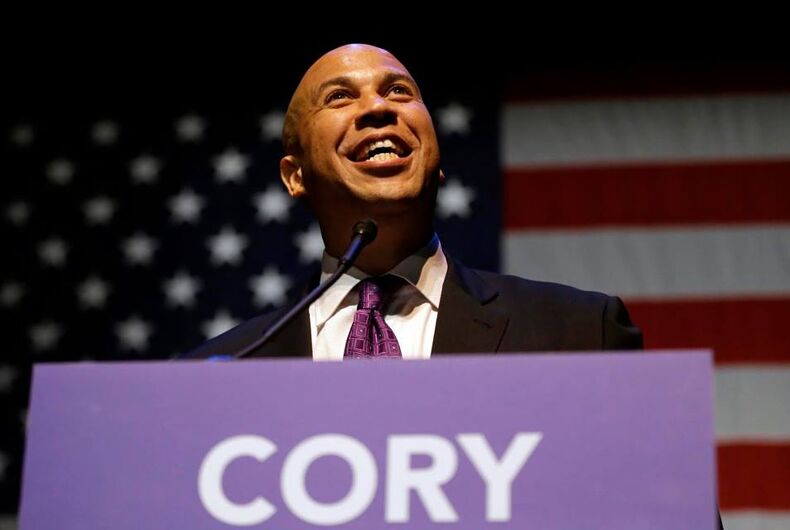 Sen. Cory Booker (D-NJ) has dropped out of the 2020 Democratic presidential primary.

Booker has supported LGBTQ equality in office ever since he was the mayor of Newark, New Jersey.

Booker announced in a tweet that he is suspending his campaign.

“I am so proud of what we built, and I feel nothing but faith in what we can accomplish together,” he wrote to his supporters.

It’s with a full heart that I share this news—I’m suspending my campaign for president.

To my team, supporters, and everyone who gave me a shot—thank you. I am so proud of what we built, and I feel nothing but faith in what we can accomplish together. pic.twitter.com/Fxvc549vlJ

In a post on Medium, he explained that the decision came down to money.

“Our campaign has reached the point where we need more money to scale up and continue building a campaign that can win — money we don’t have, and money that is harder to raise because I won’t be on the next debate stage and because the urgent business of impeachment will rightly be keeping me in Washington,” he wrote.

He wrote that he will support the Democrat who wins the nomination: “2020 is the most important election of our lifetimes — we have to beat Donald Trump… but beating Trump is the floor, not the ceiling.”

He has a long history of supporting LGBTQ equality. When he was mayor, he criticized Governor Chris Christie’s opposition to a bill that would have legalized marriage equality in the state.

When marriage equality was legalized in New Jersey, Booker himself officiated weddings for same-sex couples.

Booker has earned a 100 on HRC’s Congressional Scorecard in every session of Congress since he was first elected to the Senate and was one of the co-sponsors of ENDA in 2013.

He made national headlines for questioning nominees about their stances on LGBTQ issues. He grilled Secretary of State nominee Mike Pompeo for his comments that being gay is a “perversion” in Senate hearings last year, so much so that the Christian conservative organization Liberty Counsel called on him to resign for supposedly hating Christians.

During his campaign, Booker promised to repeal the transgender military ban if elected to the White House and discussed his non-binary niephew.

Throughout the primary, Booker struggled to get over 2% support in national polls.

Former Secretary of the Department of Housing and Urban Development Julián Castro and Sen. Kamala Harris (D-CA) have already dropped out of the primary.