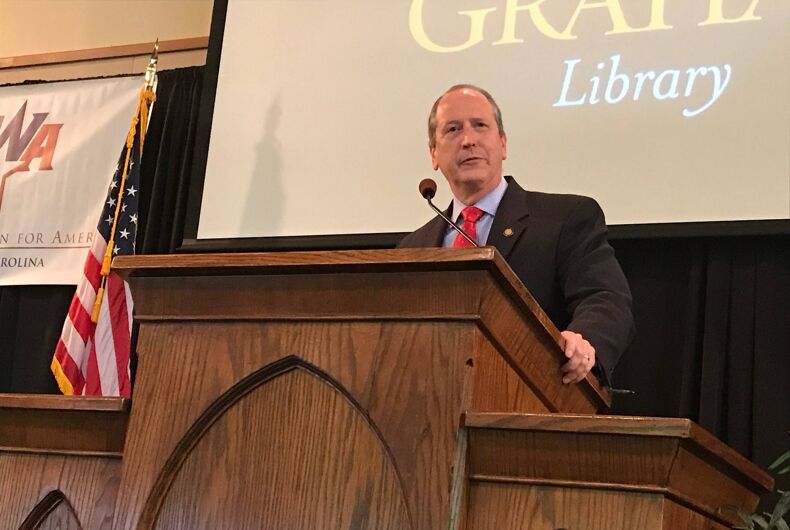 The new election was held after officials discovered that Republicans had engaged in illegal ballot harvesting activities in 2018. Bishop will now face Democratic Dan McCready and a pair of third-party candidates on September 10th.

Bishop beat nine other Republican candidates who were vying for the seat with 48% of the vote. In doing so, he avoided a further runoff that would have eroded GOP chances in the state.

If none of the GOP candidates had secured 30% of the vote, it would have forced a runoff and caused the election to move from September to November, giving Democrats more time to focus their message and raise money.

Bishop authored HB2, the infamous “bathroom bill” that required transgender people use restrooms corresponding to the sex on their birth certificates in public buildings and invalidated local ordinances protecting LGBTQ people from discrimination in the workplace or in public accommodations.

The bill led to the political downfall of North Carolina Governor Pat McCrory, who championed HB2. It was replaced by HB142 under McCrory’s successor, Roy Cooper.

Bishop’s ties to HB2 as well as the controversy over ballot harvesting, will likely hurt his chances against McCready. He also faces criticism over his poor record on health care bills in the state.

Bishop has also received criticism for investing in Gab, a social media platform favored by neo-Nazis and others.

Note: An earlier version of the title incorrectly said that Bishop was running for Senate. We regret the error.

Surprise! The states that voted for Trump are the worst places to live.