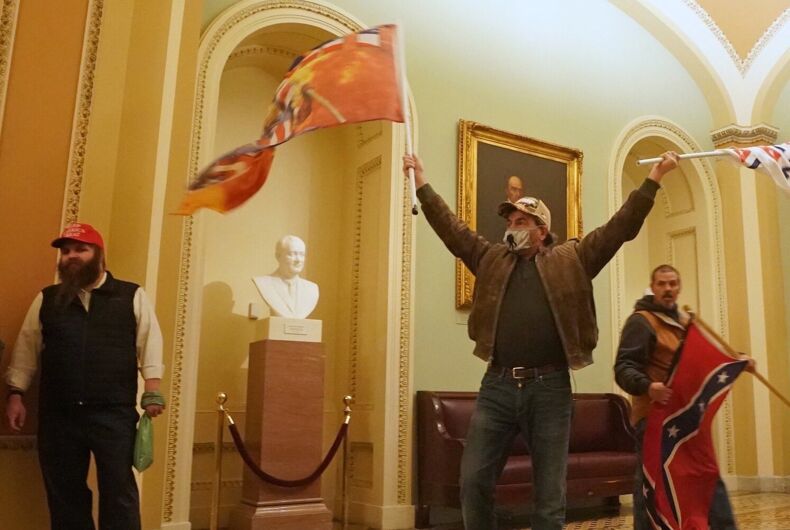 While GOP insurrectionists stormed the U.S. Capitol, terrorizing legislators and vandalizing the building, condemnations quickly mounted from most political circles. But one group remained conspicuously silent.

Log Cabin Republicans has been vociferously outspoken in their support for President Donald Trump, embracing every bit of Trump’s racist conspiratorial agenda, and has yet to condemn the attack or Trump’s role in it.

While administration officials have started resigning, politicians on both sides of the aisles have condemned the violence, and Vice President Mike Pence continued the process to certify President-elect Joe Biden as the winner of the election, the group for LGBTQ Republicans has kept mum.

The group endorsed Trump despite his repeated attacks on the LGBTQ community and supported his baseless claims of voter fraud.

“The radical left continues to distort President Trump’s record and mischaracterize his policy agenda. Log Cabin Republicans stand against their campaign of disinformation, demonization, and the usual scare tactics employed to keep the LGBTQ community hostage in the Democratic Party,” spokesperson Charles Moran said at the time.

Richard Grenell, a gay former member of the Trump administration and Log Cabin supporter, is known for trolling the social media site, repeating Trump’s lies and hurling insults at liberal politicians and reporters.

Despite tweeting that Trump supporters should be “ready to fight back,” the day before, Grenell at least managed to condemn the violence while still attacking Biden and the news media.

“Anyone participating in violence must be arrested. Immediately,” he tweeted. “This is unacceptable. And unAmerican.”

He did not call on the president to stop encouraging the violence.

Anyone participating in violence must be arrested. Immediately.

This is unacceptable. And unAmerican.

Jerame Davis, the Executive Director of Pride At Work, a group for LGBTQ working people, called the assault by Trump supporters “nothing less than an attack on our country and on our people brought to life by a president who refuses to accept that millions turned out to elect Joe Biden by overwhelming margins.”

“We are here today due to the cheering of some Republicans and the silence of others. This president and his Republican allies fed lie after lie to their supporters about this election in order to undermine the will of the people and desperately attempt to hold onto power they clearly do not deserve.”

“They will not prevail.”

“History will rightly remember today’s violence at the Capitol, incited by a sitting president who has continued to baselessly lie about the outcome of a lawful election, as a moment of great dishonor and shame for our nation. But we’d be kidding ourselves if we treated it as a total surprise,” former president Barack Obama said.

“Right now, Republican leaders have a choice made clear in the desecrated chambers of democracy. They can continue down this road and keep stoking the raging fires. Or they can choose reality and take the first steps toward extinguishing the flames. They can choose America.

“I’ve been heartened to see many members of the President’s party speak up forcefully today. Their voices add to the examples of Republican state and local election officials in states like Georgia who’ve refused to be intimidated and have discharged their duties honorably. We need more leaders like these — right now and in the days, weeks, and months ahead as President-Elect Biden works to restore a common purpose to our politics. It’s up to all of us as Americans, regardless of party, to support him in that goal.”

So far, the Log Cabin Republicans have declined to choose America. They have chosen to remain silent.