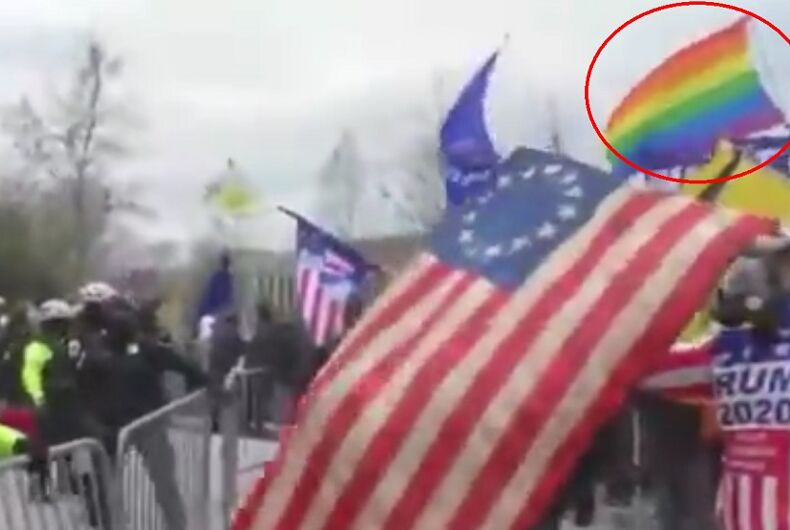 The rainbow flag at the MAGA riotsPhoto: Screenshot Twitter

The rainbow flag was spotted at the MAGA riots at the U.S. Capitol yesterday.

Supporters of Donald Trump stormed Congress while it was in the process of confirming the electoral votes received from each state in the 2020 elections, bringing in bombs and other weapons in an attack on democracy in the U.S.

Related: Trump’s secret campaign lawyer is so anti-gay even Republicans call her “a nasty bigot”

The armed insurgents were carrying flags supporting many rightwing causes, including the Confederate flag and flags with Trump’s name on them.

But one flag stood out in the crowd: the rainbow flag. Several people on Twitter noticed the six-striped rainbow flag – the same kind that’s flown all over the world during Pride Month – at the riots.

In another video of Trump supporters outside the Capitol, a white person holding a rainbow flag and a Trump flag on the same pole can be seen. The person with the rainbow flag is one of the few people who wore a facemask at the riots, presumably because they were more afraid of being identified than their fellow insurrectionists.

MAGA protesters are spraying pepper spray back at police on Capitol Hill pic.twitter.com/9TeqRefjZq

Another white Trump supporter was seen with a different rainbow flag, this one with “LGBT for Trump” written on it.

It is not clear at this time whether the people spotted with rainbow flags are LGBTQ themselves, simply want to support LGBTQ people, or were waving the rainbow flag for other reasons.

The Trump supporters stormed the Capitol yesterday, getting through a police barricade as lawmakers were evacuated from the building and police shot tear gas at the crowd.

CNN is reporting that four people died during the attack and at least 52 people had been arrested by 9:30 p.m. Wednesday night. Most other attackers were able to simply walk away.