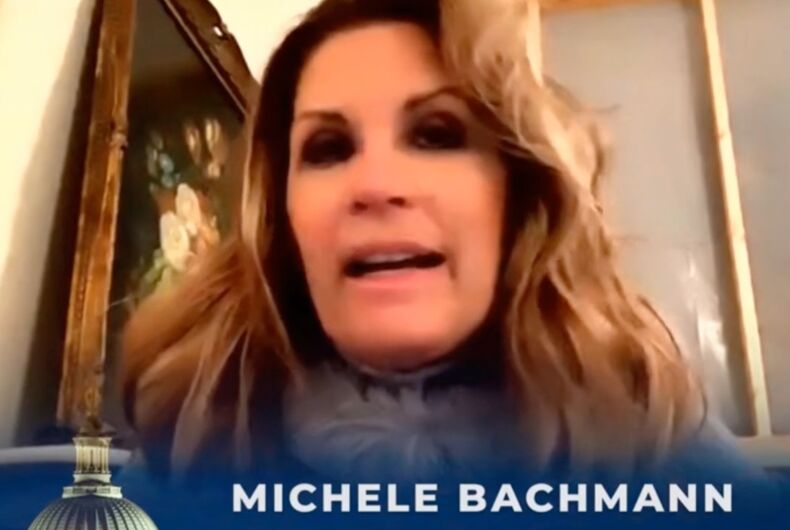 Former GOP congress member Michele Bachmann (R-MN) has been a vociferous supporter of President Donald Trump. She has endorsed his baseless conspiracy theories and cheered his cruelest attacks on her fellow Americans.

While her time in office was most noted for her wholehearted embrace of radical rightwing politics wrapped up a religious veneer, truthfulness was never considered one of her best qualities. So it’s no surprise that Bachmann is now telling her most unhinged lie yet now that she’s out of office. She claims the insurrectionists who invaded the nation’s Capitol building at Trump’s urging were actually Democrats paid to start a coup.

Bachmann attended the rally, of course. Trump had urged his followers to attend despite surging coronavirus cases nationwide and travel restrictions inside of the District of Columbia. Several of his supporters smuggled guns into the district and openly displayed them on the national mall.

“You know the kind of people that we were with [at the rally],” Bachmann said during a livestream organized by a religious right group. “The nicest, friendliest, happiest people. It was like a family reunion out there. It was incredible. It was wonderful. And then all of a sudden this happens.”

“And it reminded me of Moscow in 1917 with the Bolsheviks, where there were rabble-rousers who dressed up in the opposition’s clothing and had a violent event in the streets. And we saw what happened to Russia: Russia went into 70 years of captivity. I am telling you, I’m not a betting woman, but I would put $1,000 on any table to say this wasn’t the Trump crowd. This didn’t look anything like the Trump crowd or the prayer warriors. These were rabble-rousers. Paid rabble-rousers.”

“This is a coup,” she continued, as she tried to link Georgia Republican losses in two Senate elections to yesterday’s insurrection. “What you observed today was a coup. Does anybody honestly believe that this young pajama boy running for U.S. Senate in Georgia [Senator-elect Jon Ossoff], who produced Chinese propaganda films for the Chinese, that he was elected senator today?”

“Or this guy who’s a pro-abortion-loving pastor [Senator-elect Raphael Warnock], who is in charge of a child’s camp that abused little children, does anybody think that this cat was elected as senator in Georgia? We’re talking Georgia!”

“This was a coup in Georgia with these same phony machines run by Stacey Abrams down there — she’s not even elected, but she’s running this state — with these bought-off phony Republicans down in Georgia.”

“It was a coup so that the Senate was lost today — not lost, stolen today — and now they want to finish the job, and they want the coup to be done today, on January 6, so they can seal the deal with Joe Biden as the next president of the United States. Today was the day to have the coup, to put it all in process and have it come to the head. That’s what this was. This is a coup.

“Don’t think for a minute that these were nasty, naughty, ridiculous, hillbilly Trump people. That is not what you saw today. These were paid rabble-rousers, paid to put together a coup.”

Four people died during the armed attack and over 50 have been arrested so far. One of the dead was a woman who was shot inside the Capitol and who fervently believed in the QAnon conspiracy theory tacitly promoted by both Bachmann and Trump.

How the world reacted to Trump-worshipping rioters taking hold of the U.S. Capitol