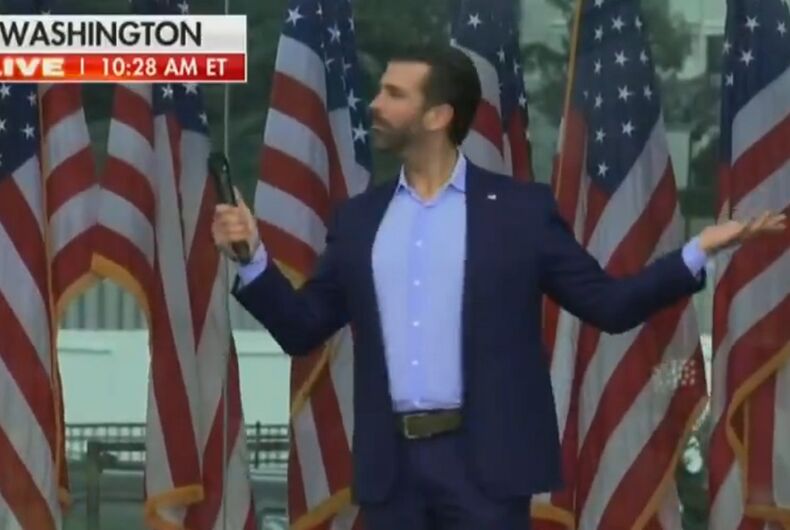 Donald Trump Jr. ranting about transgender women just prior to the attack on the CapitolPhoto: Twitter screenshot/Fox News

Donald Trump Jr. riled up the crowd that eventually stormed the Capitol yesterday with a rant about transgender women.

Speaking before his father addressed the crowd at Wednesday’s MAGA protest against Congress certifying the presidential election, Trump Jr. brought up gender-neutral language as well as transgender women participating in sports as women.

“Thank you for standing up to the bullshit!” Trump Jr. told the crowd.

“They spent money on a study that came to the incredible conclusion yesterday that trans women playing female sports have a competitive advantage,” he said, gesturing incredulously to the crowd.

“No shit!” he yelled as the crowd cheered.

Then Fox News cut off video of his speech as he continued to rant about trans women.

Later that day, the crowd would go to on to attack the Capitol, which had to be evacuated. Four people died during the armed attack and over 50 have been arrested so far.

Trump Jr. was referring to a study published last month in the British Journal of Sports Medicine, which he misrepresented. The study was specifically referring to Olympic athletes in the first year following the start of hormone replacement therapy, and the lead author suggested two years of hormones before allowing trans women to compete as women in the Olympics.

And, of course, Trump Jr. has never expressed concern about any other group of women athletes who may have an advantage in certain sports – like, for example, tall women or women from rich families – suggesting that he cares about as much about fairness in women’s sports as he does about the integrity of video games journalism.