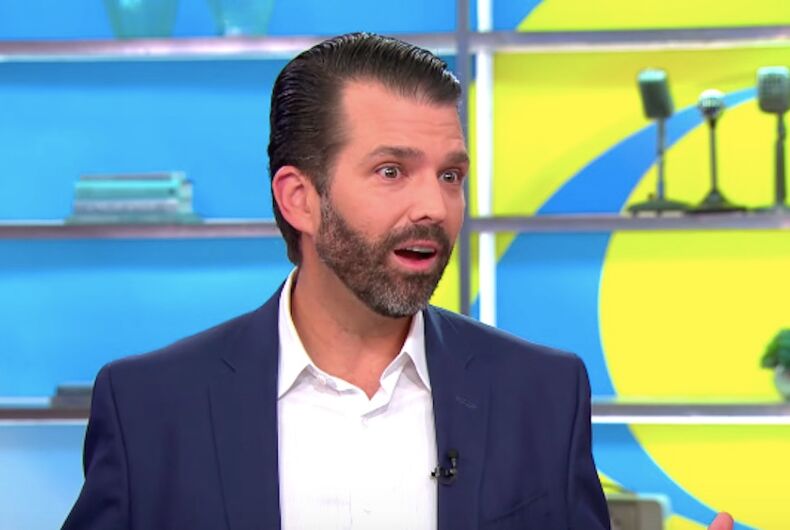 In one of his last campaign stops before Election Day, Donald Trump Jr. told a crowd in Davison, Michigan that Democrats were too radical and focused on appeasing the LGBTQ community to protect blue-collar workers.

“They’re more concerned about the 9,276 genders. I can’t list them all,” he joked. “I don’t have enough time and they don’t even know which ones they are. There’s a few more since I started speaking a few minutes ago.”

A week later, Trump Jr. has joined the fringe group of Team Trump supporters that has refused to accept the fact that his father has lost the election for President. The Democratic Party’s supposed focus on “the genders” must’ve worked.

In all actuality, It is Trump Jr. that appears fixated on trans people. For the last few years, he has made it his signature personality trait to attack transgender women.

He recently mocked Jessica Yaniv, a trans woman that tried to participate in a beauty pageant in Ontario, Canada but was denied. She’s now suing, which became a hot subject for right-wing media, leading to an article to which Trump Jr. shared in a tweet, “It has nothing to do with her being Trans,” trying to slight her appearance.

He constantly disparages transgender athletes – such as mixed martial arts fighter Fallon Fox and cyclist Rachel McKinnon, notably – and brings it up when he’s appearing on FOX News and other cable networks when trans people aren’t even a part of the topic. A whole sect of his book, Triggered: How the Left Thrives on Hate and Wants to Silence Us, talks about how allowing “mediocre [transgender women] to compete in women’s sports” is “a disservice to all the hardworking young women who have fought to get where they are.”

He concluded in a misgendering, stereotyping tirade about a match involving Fox, “There is no universe in which that should be acceptable, nor is there anyone who can argue that it was a fair fight.”

Last year, he tweeted an article about Cece Telfer, the top-ranked NCAA trans female track athlete at the time, that called her a “biological male.”

He’s even shared stories from our sister site, Queerty, among other LGBTQ websites – days after they were published – with disparaging comments as if he was keeping up on stories involving LGBTQ people.

Donald Trump Jr. being ignorant is not news. But finding out he’s a #Queerty reader is.

Whatever causes his concern with trans women, it obviously didn’t help his father enough to secure a second term as President. While Trump Jr. combatted with supposedly “Democrat” Barbies and making fun of people who didn’t support anti-LGBTQ food chain Chick-fil-A, the Trump campaign failed to garner enough support in key states to win the Presidency for a second term.

It’s likely that blunders like claiming Latino music artist Lil Pump’s endorsement represented “Black Voices”, appearing to be high at the Republican National Convention, and publishing a strange, world-wide “electoral” map prediction that had Antartica voting red while several other countries were left blank didn’t help with voters much.

Of course, no countries outside of the United States have electoral votes – but readers believe he marked India as blue because he mixed it up with Iran, which the Trump administration has been at odds with. The actual Iran is marked red on Trump Jr.’s map.

Okay, finally got around to making my electoral map prediction. #2020Election #VOTE pic.twitter.com/STmDSuQTMb

Now, Trump Jr. has tweeted in desperations at Republicans who won’t repeat his father’s baseless conspiracy theories that the election was rigged against him. He’s upset that conservatives aren’t jumping in blind to go to “total war” for his father, according to a series of tweets.

“Does anyone really believe that he did that mostly in big cities? C’mon man!!!,” the President’s eldest son griped. “These are statistical impossibilities,” he said in reply to a tweet citing numbers that reflect Biden’s performance.

“The total lack of action from virtually all of the ‘2024 GOP hopefuls’ is pretty amazing,” he continued, writing “they have a perfect platform to show that they’re willing & able to fight but they will cower to the media mob instead.”

He even agrees that his father should “fight until the end,” claiming that America “looks like a banana republic right now.”

It’s interesting that Trump Jr. wants his father to remain President, as people close to him anonymously disclosed that they believed he was “miserable” and couldn’t wait for the “four years to be over” when the administration starts.

He may be worried about his father’s approval, as Trump “joked” about never talking to Trump Jr. again if he didn’t win reelection as a recent campaign stop.

Now, in the last few hours since it was officially determined by every reputable election tracker and news source that his father has no way of winning reelection, Trump Jr. could only tweet asking for followers to “defend the Senate majority” by donating to the two Republican senators going to runoff elections in Georgia.

What Trump Jr. will do next remains to be seen. The Trump Organization executive will likely compete with his siblings (chiefly Advisor to the President, Ivanka Trump) for consideration to receive the Republican nomination for President in 2024 – although, a new poll finds that voters overwhelmingly reject the idea of a Trump dynasty, with 61% saying they don’t support either Don Jr. or Ivanka ever running for public office.

Hopefully, he’ll find something else to do between now and then that isn’t being “triggered” by the mere existence of trans people.

Kamala Harris is now the Vice President-elect. She will set so many firsts in Washington.