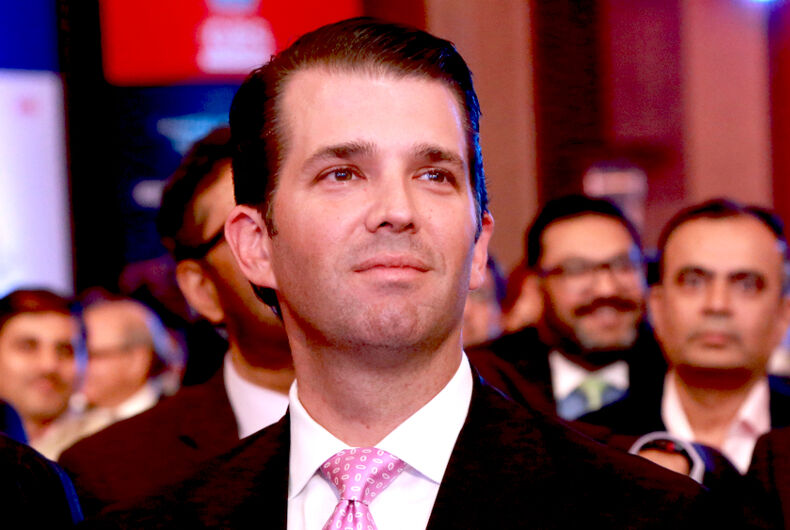 Earlier this week, Donald Trump Jr. appeared on CBS This Morning to spew transphobia while promoting his new book, Triggered: How the Left Thrives on Hate and Wants to Silence Us. Now it turns out that the transphobia in his book is even worse than what he said on TV.

The book’s description on Amazon says it’s “about the importance of fighting back and standing up for what you believe in,” and adds, “No topic is spared from political correctness. This is the book that the leftist elites don’t want you to read!”

In the book, Trump Jr. writes that trans inclusion in sports does “a disservice to all the hardworking young women who have fought to get to where they are” and results in “lost scholarships” and “a safety issue” for cisgender women.

To illustrate this “safety issue,” he brings up trans mixed martial arts fight Fallon Fox who fractured her competitor’s eye socket during a 2014 match. He misgenders Fox and all trans female athletes in the process:

This wasn’t just a man who wanted to run races in lanes next to women. This was a man who was losing bouts to other men, so he decided he wanted to beat up women instead. He used his big hands to beat Brents into an early technical knockout. There is no universe in which that should be acceptable, nor is there anyone who can argue that it was a fair fight!

By misgendering all trans people, Trump Jr. continues to peddle the dangerous lie that trans women are really just “men pretending to be women.” He also goes a step further by implying that all trans female athletes want to harm women by either stealing their awards or physically harming them — a dangerous trope that encourages people to harass, hurt, and kill trans people.

Considering his father’s many transphobic political policies, perhaps his transphobia shouldn’t be all too surprising.