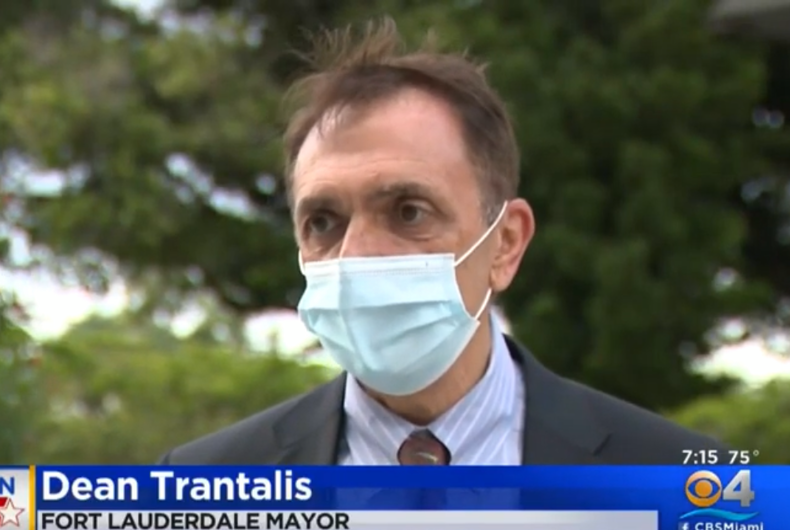 Dean Trantalis, the mayor of Fort Lauderdale, Florida, revealed to local media that he was facing intimidation when attempting to visit several early voting locations.

“I encountered a number of people who were there on behalf of the Trump campaign who immediately accosted me,” Mayor Trantalis told CBS Miami, “calling me pedophile, started calling me a f**got and thought it was fun.”

Trantalis explained that he was first targeted when he was at a early voting poll location at nearby Coral Ridge Mall. “They had a blow horn and they were just announcing it all over the place,” he said.

Reports indicate that this appears to be a pattern that occurred throughout Election Week where LGBTQ people may have been targeted. A man in the area who asked not to be identified also told CBS Miami in a separate report that he was attacked. He and a friend were targeted by pro-Trump gatherers outside gay bars on October 30.

The man alleges he was shot – with what turned out to be a paintball gun.

Trump supporters have raised a significant presence in the South Florida area both before and following Election Day, which had the highest turnout in American history and led to Donald Trump’s pending defeat. On Election Day, the crowd was recording chanting homophobic language as they gathered outside nearby Wilton Manors. A man, instead of arguing or escalating the situation, simply played violin over their rhetoric.

The Trump supporters continue popping up in the area in large groups, protesting the continuous counting of votes by certain states.

Mayor Trantalis was first harassed last weekend. After that, he visited another polling place closer to his home. He alleges he was targeted there, too – and again, at his residence. He provided images of his campaign yard signs with pink flags attached, and his name also written on them, within “two blocks” from his home.

“Almost to say, ‘We’re watching you, we’re around your house.’ They wanted to intimidate me,” he concludes.

Trantalis has served as mayor since 2018, being the first out person to hold that office. He was previously the first out county commissioner in Fort Lauderdale, Florida history. He has served as vice-mayor twice, from 2005 to 2006 and 2016 to 2017.

The 67 year-old was unharmed, and he was still able to win reelection, meaning he will begin his second term this March. In addition to all that he dealt with this week, the area is preparing for a Tropical Depression to make an impact this weekend.

He also added that “several” of them were not from Fort Lauderdale, but elsewhere within the state or region, saying “they admitted they came from other parts of the state.”

For his part, the anonymous man deduced that “it’s definitely people terrorizing the neighborhood, the community. It’s clear that they were looking for someone to be able to target and attack.”

In another separate incident, a Trump supporter in Wilton Manors alleges he was injured this week in the area in a politically-induced attack also. He ended up in the hospital.

Anyone with information regarding the paintball incident is asked to help investigators find the guys responsible by calling Broward Crime Stoppers at (954) 493-TIPS.