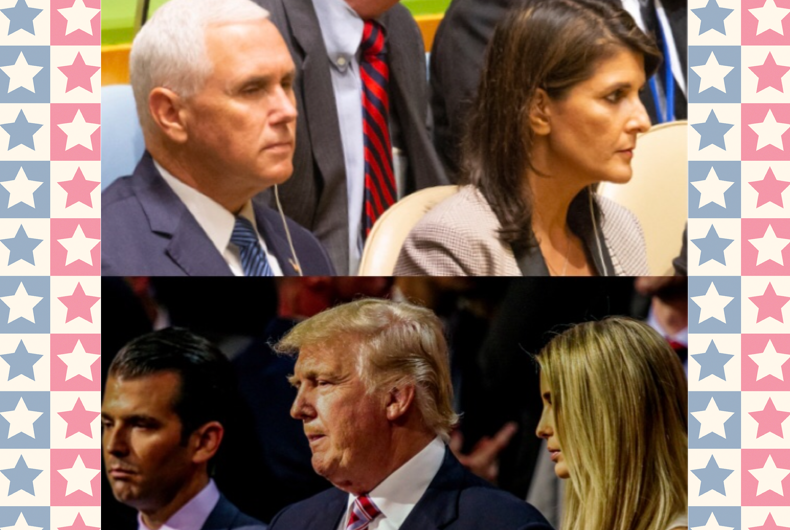 With the start of the new year, Democrats begin to recognize the importance of the Presidential primaries and narrow down their options for the general election, as their entire party is position itself to defeat Donald Trump.

In the meanwhile, Trump and his staunch supporters are trying to show no signs of worry. He’s already spent much of his time campaigning, and he appears to be sticking to his 2016 strategy: concentrating on his core demographic of voters as opposed to branching out, and mocking or patronizing his potential competition (including Pete Buttigieg.)

In fact, Republicans are already so confident that they will cruise through this year’s election, they’ve already begun looking toward 2024’s Presidential race – and a new poll reveals the party’s preferred nominees for the next commander-in-chief.

Axios ran a poll of over 1,800 Republicans asking who they would want to vote for in the 2024 general election, and current Vice President Mike Pence came in first with 40%, followed by the President’s oldest son, Donald Trump, Jr. at 29%. Former UN Ambassador/South Carolina Gov. Nikki Haley is a close third at 26%, and first daughter Ivanka Trump comes in a distant (but still surprisingly high) 16%. Maro Rubio rounds out their Top 5 at 15%.

The results are “a vivid illustration of just how strong Trump’s brand is with the GOP,” Axios surmises. The President is far from guaranteed reelection this year, but being the incumbent will help him remain a close favorite come November. The last President not to win a second term was George H.W. Bush in 1992’s election, nearly 30 years ago.

With a looming impeachment trial, however, there’s at least a sense of doubt that Trump will have to leave the White House sooner than later. The only President to face impeachment in their first term was Andrew Johnson – who was unpopular in the aftermath of a divided nation and lost the Democratic primary. Officially, Trump has some competition in the Republican primary, but he’s expected to cruise through and earn the party’s nomination with little fanfare.

While we oft come across moments of Trump dissenters from the right, most people – namely, the core of their voters – will be fine with letting bygones be bygones at election time. “The president’s poll numbers reflect the waning influence of the once vocal critics may have had within the party — [Trump’s] winning over converts, even if he may have polarized more independent voters,” NPR concluded last May. “Trump has essentially remade the Republican Party in his image,” Princeton professor Julian Zelizer said at the time.

Pence, Haley, and the Trump kin are favored to be potential successors because they have quietly defined themselves in differing molds of Trump’s likeness.

Donald Trump, Jr.’s book is currently a bestseller, and he serves as the opening act or fill-in for his father on the campaign trail. One crowd at a stop in San Antonio, Texas, started a “2024” chant while Trump’s oldest child stood at the podium. While he officially came in second in this poll, Axios notes that he was “the top choice among young voters.”

That should not be surprising, as Junior shares many of his father’s qualities – having a strange and intense need to tweet, the incredible ability to lie effortlessly, and being under federal investigation. He also has amassed a lifetime’s worth of endorsing or spreading anti-LGBT beliefs or misconception, all by 42 years old.

As for Pence, who “was the clear preference for older voters,” his entire career – including taking Trump’s offer to serve as Vice President – has been in line for this opportunity. Rumors that Pence is an outsider within the administration and has wanted out several times have remained persistent, but so has Pence’s public loyalty to the President and his agenda. It’s likely that he’s doing that as to not hurt his chances in the coming years of moving over to the Oval Office. A profile of the Vice President in The Atlantic opens in reference to his ‘loyalty’ – “No man can serve two masters, the Bible teaches, but Mike Pence is giving it his all.”

If that happens, his well-documented anti-LGBT agenda could set back decades of progress.

Once considered a fringe personality and lackluster politician, Nikki Haley has since became the charismatic darling of many in the right. She didn’t even get along with Trump (or vice versa) when he first became popular in 2016 – even saying she was ‘not a fan’ after his primary victory – but they put aside their differences to focus on pushing their ultimate agendas.

While Haley went to the UN to sell Trump’s policies to the rest of the world for two years, she molded herself with a more ‘respectable’ reputation for herself than she did as a governor. She also moved to the right on several issues, such as becoming a defender of the Confederate flag that she was previously not so attached to. She resigned her post to make an anticipated fortune in the private sector, possibly while she waits for the build up to 2024.

On the other hand, Ivanka was one considered to be the heir apparent to Trump’s ‘dynasty’, but she has been supplanted by her older brother. She seems to have cooled down on her political ambitions anyhow, as the Advisor to the President has talked about putting her young children first, intensifying claims that her influence within the White House has begun to decline. That hasn’t stopped her from taking advantage of her growing influence outside of just politics, but while she claims to be an LGBT ally, the people Ivanka mingles with – and her complicity with the administration’s policies – make that clearly false.

It’s not immediately clear which of these ‘leaders’ will take the reigns of the Republican party post-Trump, but it is clear they will not be giving up their core ideals – which, at least now, heavily relies on discrimination against LGBT people and allowing religious people the ‘freedom’ to discriminate as well.

The immediate question worth answering is, will the Democratic party pull through to put a halt to this – at least for four years?