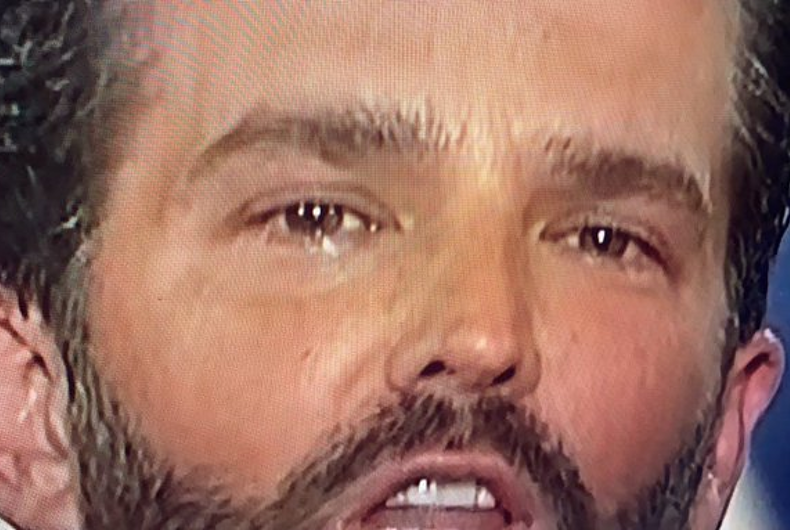 Donald Trump Jr. has been accused of doing cocaine shortly before giving his speech for the Republican National ConventionPhoto: Screenshot

The opening night of the Republican National Convention didn’t feature LGBTQ people – let alone issues of importance to the community – but it started buzz online.

Donald Trump Jr. and Kimberly Guilfoyle have been accused of doing drugs before giving their speeches.

Related: This heartwarming story about Joe Biden will help you survive the Republican convention

I’m not saying the Trump family had a bad night, but “adderall” and “coked up” are both now trending.

Guilfoyle, who is Trump Jr.’s girlfriend and a top fundraiser for Trump’s 2020 reelection campaign, shouted her way through her speech.

“This is the first time in my life I’ve had to turn down the volume on C-SPAN,” Late Show host Stephen Colbert joked after the event ended. “God, I’m glad we already had our kids because I think if I was too close to the TV, I might have been sterilized by that. Oh my God. That was a tough act to follow or watch.”

It was so 'strong' that Cocaine, Don Jr, Kimberly Guilfoyle, Fidel Castro, Erdogan, Coked, and Loch Ness were all trending and Faux Spews cut away from it.

Not sure that's the 'uplifiting, positive' message you were going for. pic.twitter.com/vMgHW0KqH9

But Trump Jr. earned the most attention for his jerky manic speech given with bloodshot watery eyes during his pre-taped speech. The immediate reaction was that he was high on drugs like cocaine.

I don’t think that’s why we’re still talking about it #coked pic.twitter.com/YSJKxY43fV

“Many people” are saying Junior was coked up when he gave his taped speech for his daddy at the RNC.

WOW. @DonaldJTrumpJr you should have held back a little there. And one word: Visine. #DonnieDrugs https://t.co/hC5mgkbVHv

Jerry Falwell Jr. resigned from Liberty U. Then withdrew his resignation. Then resigned again.