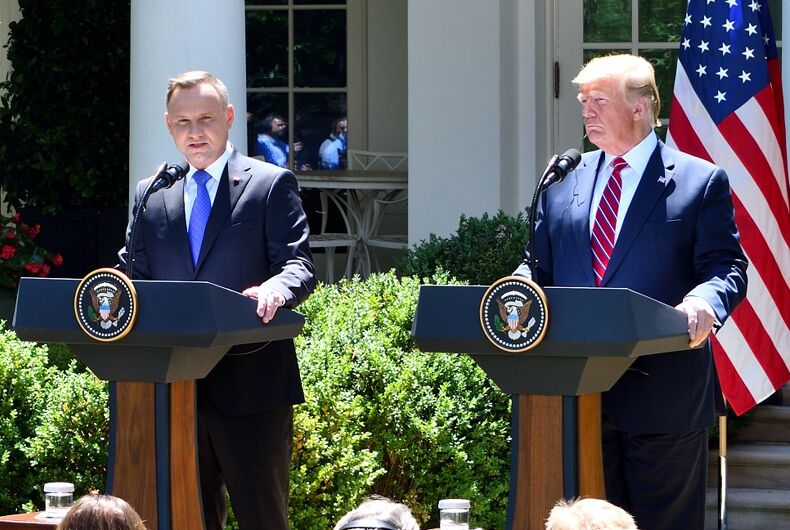 On Twitter, Donald Trump congratulated Poland’s anti-LGBTQ President Andrzej Duda on his re-election, referring to the authoritarian leader as his “friend.”

“Congratulations to my friend President @AndrzejDuda of Poland on his historic re-election!” Trump wrote. “Looking forward to continuing our important work together across many issues, including defense, trade, energy, and telecommunications security!”

Related: Trump’s spokesperson is “proud” of his “great record when it comes to the LGBT community”

Congratulations to my friend President @AndrzejDuda of Poland on his historic re-election! Looking forward to continuing our important work together across many issues, including defense, trade, energy, and telecommunications security!

Anti-LGBTQ rhetoric was a crucial part of Duda’s reelection campaign. In fact, his declaration that “LGBT are not people, they are an ideology” became a staple.

Duda, who said that this “LGBT ideology” was more destructive than communism, also pledged to ban same-sex marriage, adoption by same-sex couples, as well as the teaching of LGBTQ issues in schools.

Duda’s rhetoric has trickled down to local leadership, Philippe Dam, the advocacy director for Human Rights Watch, told NBC News. Local politicians, empowered by sentiment from the top, have established LGBT-free zones throughout the country. Unsurprisingly, the LGBTQ advocacy group ILGA has said Poland is the worst country in Europe for LGBTQ rights.

Trump not only congratulated Duda on his win, but he also hosted him at the White House in June, making him the first foreign dignitary to visit since the beginning of the pandemic.

“As close partners and NATO allies, the United States and Poland continue to expand our cooperation across a wide range of issues,” said a White House statement on Duda’s visit. “President Trump and President Duda will discuss further advancing our cooperation on defense, as well as trade, energy, and telecommunications security.”

Duda is far from the first anti-LGBTQ leader Trump has hosted.

In March 2019, Trump stood outside the White House beside Brazilian President Jair Bolsonaro as Bolsonaro declared that the U.S. and Brazil “stand side by side in their efforts to ensure liberties and respect to the traditional family lifestyles and respect to God, our creator, against the gender ideology and the politically correct attitudes and against fake news.”

And in May 2019, Trump welcomed Hungarian leader Viktor Orban, who has been called a “hero” by the anti-LGBTQ World Congress of Families and who has stated his belief that “every child has the right to a mother and a father.”

And of course, there is Trump’s continued friendship with Vladimir Putin, who signed Russia’s gay propaganda law, has repeatedly expressed anti-LGBTQ sentiment, and has failed to intervene to stop the extreme anti-LGBTQ violence that continues in Chechnya.

Trump himself has launched his own attacks against the LGBTQ community as of late, with his administration proposing new asylum regulations that could be disastrous for LGBTQ people seeking to enter the United States to escape persecution.

Schools superintendent said “God” told him being gay is a “choice.” Now he claims he was “set up.”