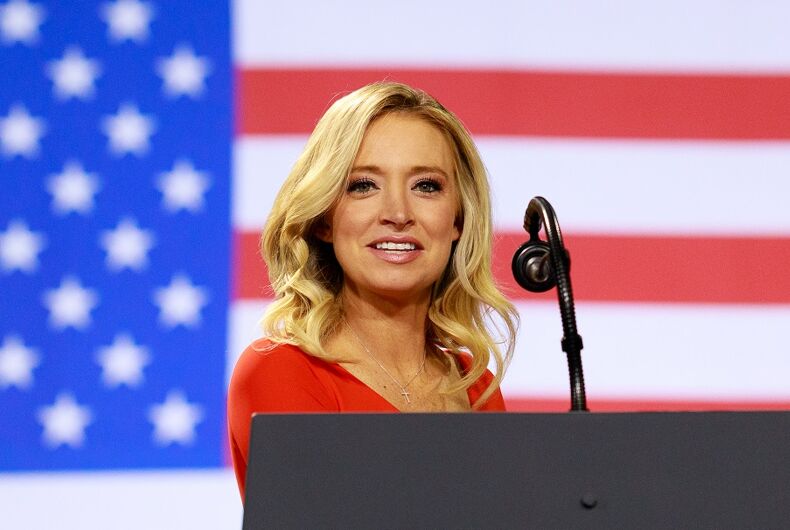 Donald Trump’s press secretary dodged a question about the transgender military ban by saying that the administration is “proud” of its “great record when it comes to the LGBT community.”

At a White House press conference this past Monday, Washington Blade reporter Chris Johnson asked Press Secretary Kayleigh McEnany – the same Kayleigh McEnany with a long history of anti-LGBTQ comments – about the letter House Democrats sent the Departments of Defense and Justice last week asking them to end the transgender military ban.

Instead of saying that the Trump administration has changed its mind on the transgender military ban or even defending it, McEnany turned to a page in her notes and defended Trump’s record on LGBTQ issues in general.

“I haven’t talked to him about that specific policy,” she started, reading from a list of talking points about LGBTQ people, “but this president is proud that in 2019 we launched a global initiative to end the criminalization of homosexuality throughout the world. He has a great record when it comes to the LGBT community. The Trump administration eased a ban on blood donations from gay and bisexual men and he launched a plan to end the AIDS epidemic by 2030, so we’re very proud of our achievements.”

Johnson pressed her on the policy, bringing up the Supreme Court’s ruling in Bostock v. Clayton County, which found that Title VII’s ban on discrimination “because of sex” includes discrimination against LGBTQ people, which could make it easier for a federal judge to rule against the transgender military ban.

McEnany responded that the Bostock ruling was not democratic and brought about by “judicial dictate,” implying that the Trump administration plans to keep fighting against court rulings that ban discrimination against LGBTQ people.

‪Blade reporter Chris Johnson pressed the White House if Trump would reconsider his ban on transgender people serving in the military. Press Secretary Kayleigh McEnany insisted that the president "has a great record when it comes to the LGBT community" ‬

Her three examples are dubious at best.

After the global initiative to end the criminalization of homosexuality was announced by the U.S. Ambassador to Germany, Trump was asked about it and he acted like he had never heard of it.

The campaign to decriminalize homosexuality worldwide hasn’t produced any notable results, it has been touted by the right as a sign that Trump isn’t completely anti-LGBTQ. In the meantime, Trump’s State Department bans U.S. embassies from flying the rainbow flag, which is pretty much the least they can do to support LGBTQ people abroad.

When it comes to the gay blood ban, the Food and Drug Administration reduced the deferral period on men who have sex with men to three months – following intense pressure from Congressional Democrats as the coronavirus pandemic depleted the country’s blood supply – while Trump said he didn’t even know about the policy change.

Last, Trump pledged to end HIV transmissions by 2030, but experts say that his policies – which include making it easier for religious health care professionals to deny care to transgender people and defunding health care programs that people living with HIV depend on – are working against that goal.

HRC’s Lucas Acosta said that McEnany is “is living in a delusion.”

“They have issued rules sanctioning discrimination against LGBTQ people, particularly transgender people, in healthcare programs and activities,” Acosta told the Blade. “They have ignored anti-LGBTQ atrocities in Chechnya and anti-trans violence here at home. They have banned trans people from serving in the military and turned away trans children with civil rights complaints from the Department of Education. They have endorsed allowing businesses to discriminate against LGBTQ people solely because of who they are or who they love. They are denying trans people equal access to emergency shelters, needlessly and cruelly putting one of the most vulnerable groups in the country in greater danger.”

A transphobic veteran returned from war & refused to wear a mask. He died on the Fourth of July.