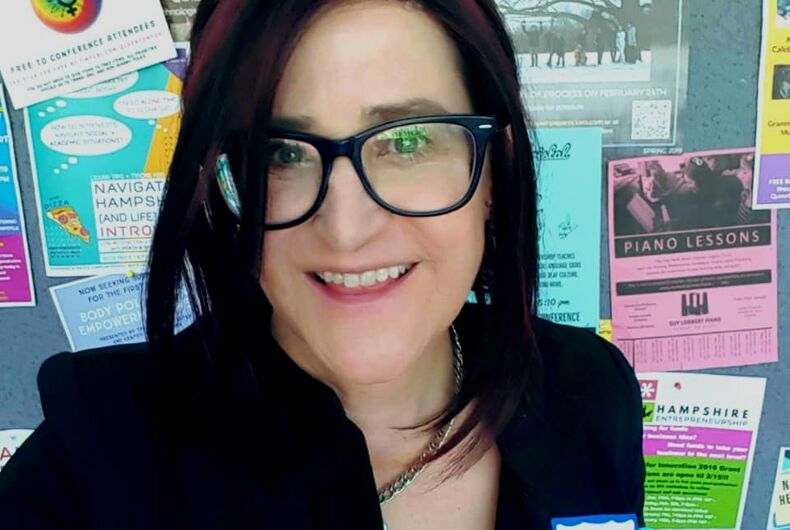 Now, Drew is also vying to become the state’s first out transgender state representative. And today will decide if her race will go on as Maine voters go to the polls for the Democratic primary election.

Facing off against Traci Gere in the primary, Drew told LGBTQ Nation she has no idea what to expect, but that she is excited for the day ahead.

“I don’t push it aside,” she said of her potential to break yet another barrier.

“For me, being trans is actually a really important thing. It has definitely informed a lot of how I see issues and how I interact with people, especially people who have been marginalized or discriminated against. I know what that feels like myself, so I think that’s really important and I also know that it’s important to have that visibility in place for young people to see that you can be whatever you dream of.”

Drew was only seven years old when she decided she would one day run for public office, and she hopes to empower other young trans kids to dream the way she did.

“[Being the first] does send a message to younger folks that you can be you,” she said.

Drew was giddy during her conversation with LGBTQ Nation. Currently the program director for Equality Maine, she had just found out that a birth certificate initiative she’d been advocating for that will allow a nonbinary gender option had succeeded.

“Now, folks in Maine can get an X marker on their birth certificate,” Drew exclaimed. “They can update their gender marker without any medical procedures, which is really great. And parents can choose an X marker at birth for their child.”

Drew, who is also a member of the Maine Advisory Board to the US Commission on Civil Rights, said advocating for vulnerable communities will continue to be a priority for her as a state representative.

“Of course I’m going to keep advocating for LGBTQ equality across the state,” she said, “But definitely other civil rights issues are right in front of me…Unfortunately here in Maine, we have the highest percentage of people of color being diagnosed with COVID, so there really are some racial disparities we need to look at in terms of healthcare in the state.”

Working for Equality Maine, she said, has made her a more effective advocate.

“In the last eight years, I have talked with about 4,000 people per year on LGBTQ rights across the state of Maine and the country, and I’ve dealt with folks who don’t want to listen to what I have to say or understand what it means to be LGBTQ, but I can find a way because I’m willing to hear people out.”

She also believes her twenty years as an art teacher will deeply affect the way she leads.

“I’ve had to learn how to work with all sorts of different types of people. The people that came into my classroom or were on my track team came from every walk of life, every socioeconomic status, every race, every religion, and I had to do my best to make sure every one of those people could succeed and feel good about themselves. That was my mission as a teacher and in my work at Equality Maine, and what I hope to do as a legislator is to make sure everyone’s voice is heard.”

Drew’s district, House District Nine, is not solidly Democratic, she said. As such, even if she wins today’s primary, she will have to fight hard against the Republican candidate, former representative Stedman Seavey.

Campaigning has been a challenge, she said, without the opportunity to meet people face to face. The pandemic has required her to focus almost exclusively on phone calls and letters.

“At first we weren’t even talking to people about politics. We were saying, how are you doing? Do you need any help getting groceries or medications? From there people wanted to know a little more about me.”

She wants people to know she is compassionate, and that this compassion drives the way she makes decisions.

“I’m not a very impulsive person,” she said. “Ask anybody. Really, I’m not the person to suddenly rush out and get an ice cream sundae. I’m pretty methodical and straightforward. I do a lot of research. I want to listen to people. I also know not everything is perfect, and I’m willing to make mistakes and learn from them.”