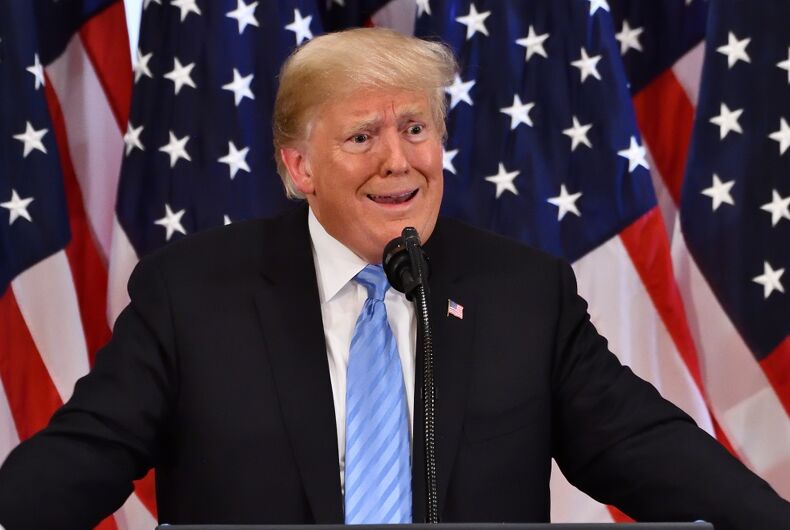 After the FDA announced they would loosen the restrictions for blood donation by men who have had sex with another man, a group for LGBTQ Republicans rushed out a statement thanking Donald Trump for his “leadership” and “quick thinking” during the coronavirus pandemic.

One problem: Trump had no idea the government was making the change. “I didn’t know anything about that,” he said.

The Log Cabin Republicans (LCR) issued a press release that obsequiously praised Trump while blaming former President Barack Obama’s administration for the gay blood ban, which was first put in place in 1983. The ban was first loosened under Obama in 2015, from a lifetime ban on blood donation from men who have sex with men to one year since the last time a man has had sex with another man.

Charles T. Moran, the LCR’s spokesman, said, “President Trump’s direction to cut through the FDA bureaucracy and red-tape is one of many steps his Administration is taking to combat the crisis, and we’re thankful for his leadership and quick thinking in relaxing the outdated Obama-era restrictions. With the need for blood quickly becoming a priority, America can count on this Administration’s actions to end gay men’s blood being devalued.”

But when Trump was asked at a coronavirus briefing about the FDA’s policy change, he admitted that he had no hand in the decision.

“I didn’t know anything about that,” he said. “That was done by the FDA, very capable people at the FDA.”

Moran, not backing down, tried to spin his previous praise in a statement to the Washington Blade.

“On March 19, President Trump ordered the ‘removal of outdated FDA rules and bureaucracy,’” Moran said. “That’s exactly what happened when the FDA issued its relaxed guidelines. … So yes, I stand by my statement that he had a role in this.”

“LGBTQ people are not Trump’s priority,” he said. “Never have been, and by every indicator, never will be.”

The FDA’s policy change also applies to women, reducing the period from the last time a woman had sex with a man who had sex with another man from 12 months to three months.

Texas woman claimed COVID-19 is a media hoax & can be stopped by “faith.” Days later she died.