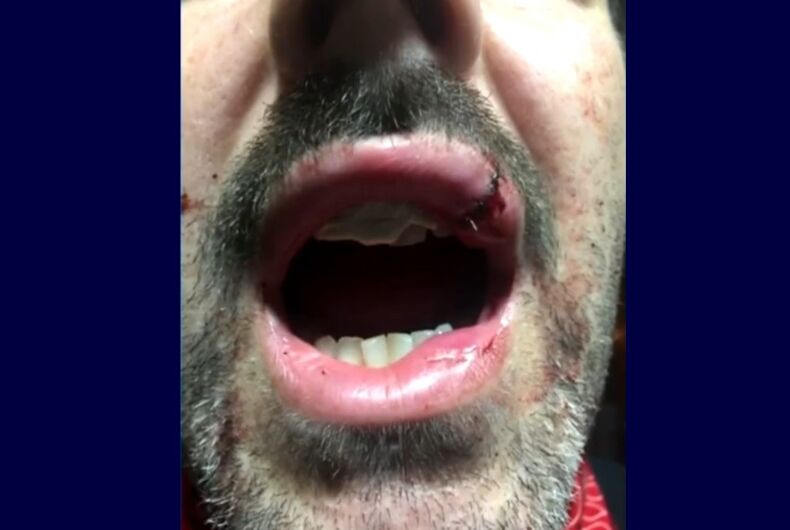 A man allegedly brutally attacked a gay man and knocked out his two front teeth just because he put a rainbow flag on his property.

Tom Anderson said that he displayed a rainbow flag outside of his home in Taunton, Massachusetts late last month to celebrate Pride Month.

Related: Two men were thrown into the sea in a brutal hate crime during Pride

Just an hour later, Anderson said that man stopped his car and attacked. The man yelled at him and used obscene language, called him a slur, and then punched him in the face repeatedly, Anderson told Boston 25 News.

“I was kind of in a state of disbelief, like really, I’m in my own yard,” he said.

His husband of nine years Jacob Anderson came out and saw part of the attack.

“I saw the guy just come up and yell those nasty words at my husband and then hit him two or three times and then took off back into his car and screeched away,” Jacob Anderson said.

“It’s definitely a hate crime just based on the words he used.”

The couple said that another driver stopped to help and they called the police, but Tom Anderson was left disfigured by the attacker: he lost his two front teeth and had to get stitches.

Tom and Jacob Anderson said they gave police a description of the attacker’s car and hope that he gets caught.

“I’m more worried about him getting away with it and thinking, ‘Okay this is okay to do,’” said Tom Anderson.

He said that this hasn’t scared him out of flying the rainbow flag.

“I want to just keep it up all year long now.”