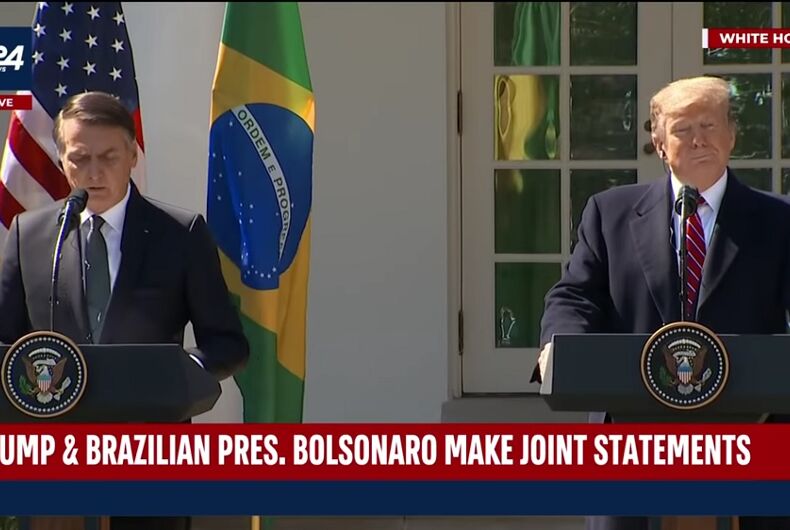 President Jair Bolsonaro said that the U.S. and Brazil are united in their efforts to undermine and erase LGBTQ people while Donald Trump stood beside him.

Bolsonaro and Trump delivered joint statements at the White House yesterday to kick off the Brazilian president’s visit to the U.S.

At the end of his statement, Bolsonaro said, “In conclusion, may I say that Brazil and the United States stand side by side in their efforts to ensure liberties and respect to the traditional family lifestyles and respect to God, our creator, against the gender ideology and the politically correct attitudes and against fake news.”

“May I voice my admiration and recognition to president Donald Trump on this beautiful day where we seal the promising alliance between the two most promising and largest democracies in the Western hemisphere,” he added.

Trump did not respond to those comments, but he smirked when Bolsonaro mentioned “fake news.” The two went on to take questions on unrelated matters from the press.

Bolsonaro is staunchly opposed to LGBTQ equality. He has said that he would never love his son if he came out as gay.

On television in 2017, he said that he would never have a gay son because his family has “a good education.”

He also promised to ban any references to LGBTQ people at school, saying that it’s a threat to the country’s Christian values.

Bolsonaro tweeted a video two weeks ago of a man peeing on another man, saying that the video “exposes the truth” about gay people.