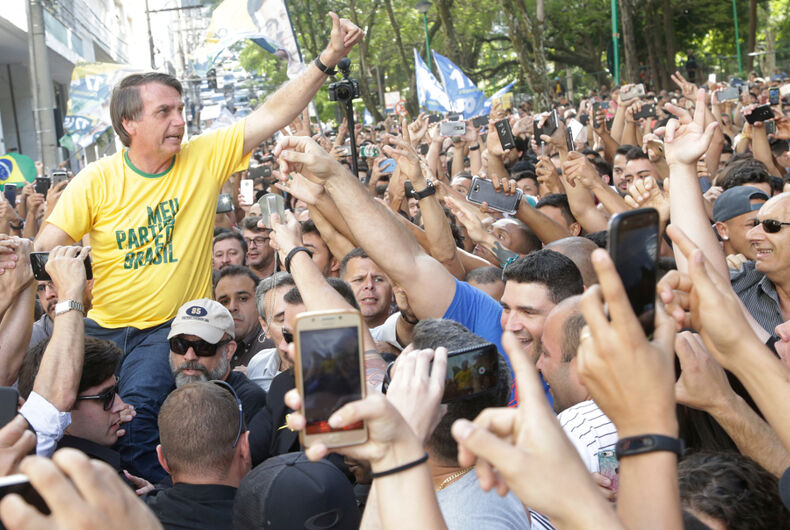 In his first week in office, newly elected Brazilian President Jair Bolsonaro started actions to roll back LGBTQ rights. So it was only a matter of time before a newspaper covered one of his gay fans.

Bloomberg.com brings us the story of Tiago Pavinatto, a 34-year-old gay lawyer and newspaper columnist who feels confident that Bolsonaro won’t harm LGBTQ rights because, “He will be surrounded by people who will ensure gay rights be respected.”

Sounds a bit like the gay conservatives who expected Trump to support LGBTQ rights in America.

According to Bloomberg.com, 29 percent of gay Brazilians planned on supporting Bolsonaro in the October 2018 national elections.

Throughout his career, Bolsonaro has vilified the LGBTQ community, largely using gay people as evidence of Brazil’s eroding moral values. He has stated that parents should beat their kids for being gay and that he’d rather have a dead son than a gay one. He has also criticized a school anti-bullying program as a “gay kit” designed to turn kids queer.

But Pavinatto and other gay voters see Bolsonaro’s homophobia as a ploy to win over macho and conservative voters in a country where conservative Christians increasingly hold power. They also see Bolsonaro as the only alternative to the country’s former ruling party which was plagued by corruption.

Bloomberg.com says Bolsonaro began backing off of his anti-gay rhetoric three days before the October elections, stating that the government “has nothing do to with anyone’s sexual orientation” and he could see himself appointing a gay cabinet member.