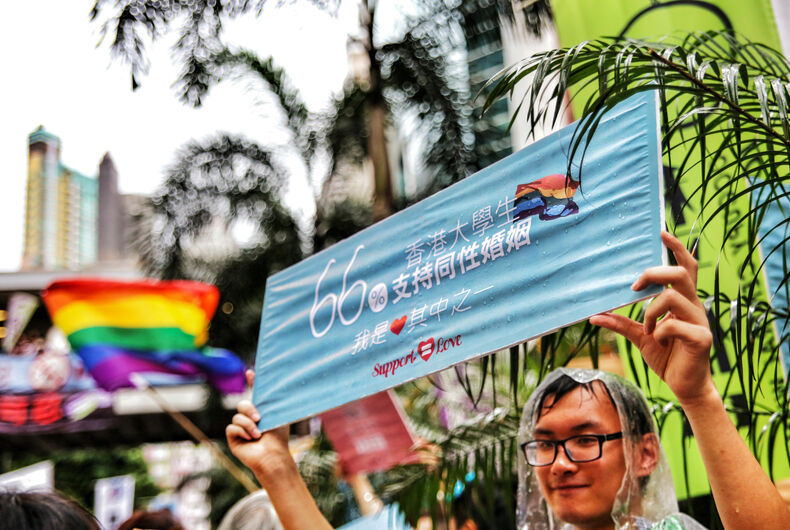 The Rainbow group taught students about LGBTQ issues and the Education Center helped raise awareness about sexual assault and harassment. Nevertheless, the Bureau listed both organizations as “illegal social organizations” because both groups had allegedly not properly registered with the government.

This reasoning is a sneaky maneuver used by many anti-LGBTQ governments to put queer activists in a Catch-22.

China is one of 55 countries around the world that forbids LGBTQ groups from officially forming and registering with the government. In order to receive official government approval, these groups must remove any mention of “gay” or “LGBTQ” from their names and mission statements.

But this makes it hard for other LGBTQ people to find the groups. And if an LGBTQ group does register while keeping their queerness on display, their organizers leave themselves open to government harassment and monitoring just for doing so.

Homosexuality is technically legal in China, but the Chinese government harasses and imprisons LGBTQ activists and has no laws against so-called ex-gay conversion therapy. Three years ago, the country banned all LGBTQ TV and queer web content, calling it similar to incest and sexual abuse.

The government’s anti-LGBTQ sentiment stems mostly from viewing queer identity as a form of social protest rather than religious stigma against homosexuality (as is the case in the U.S.). The Chinese government’s approach to queer issues and groups is roughly summarized as “don’t encourage, don’t discourage, don’t promote.”

An estimated 22 percent to 95 percent of gay Chinese men stay closeted — many marry women to hide their homosexuality from their families.

A reformed homophobe wants to be the Democratic presidential nominee