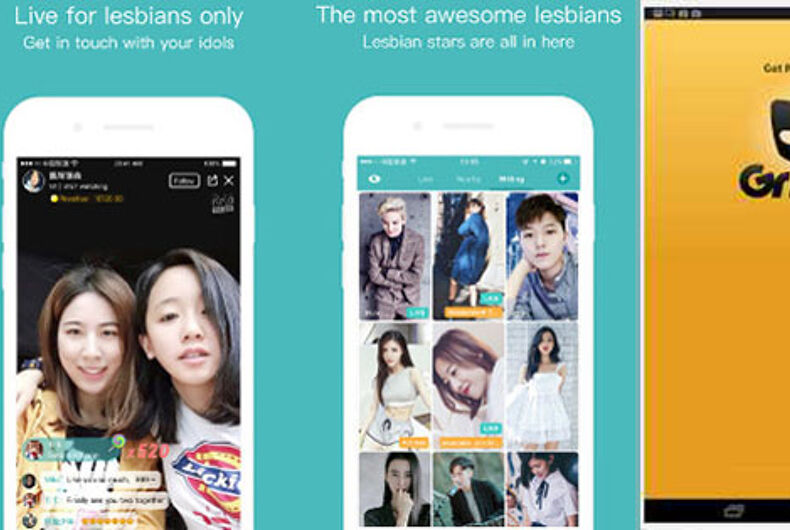 China’s number one mobile app for lesbians has been switched off by the government, just days after a Chinese conglomerate purchased a controlling share of Grindr, the world’s most popular gay dating app.

The shuttering of Rela left 5 million lesbians in China without what Tech in Asia described as a “portal for movies, literature, and other resources, ranging from event information for lectures on LGBTQ topics to contact details for overseas marriage services.”

No reason was given for the shutdown of Rela, but despite the unusual timing of the closure adjacent to the Grindr deal, speculation has focused on a Shanghai event that is the subject of many videos posted to China’s version of YouTube, Weibo.

That event on May 20th — Lovers Day in China — was marred by police who forced mothers of LGBTQ singles to leave a park where they “gatecrashed” a marriage market gathering of other matchmaking moms, according to the Shangai Times.

Parents of unwed sons and daughters raised a ruckus over their “unregistered event,” featuring rainbow colored umbrellas in an attempt to raise LGBTQ awareness.

China has made great strides toward LGBTQ equality in recent months, agreeing to send a team of gay athletes to the Paris World Outgames in 2018, announcing its first-ever Mr. Gay China, and Taiwan became the first nation in Asia to legalize marriage equality. On Wednesday Taiwan’s supreme court ruled banning same-sex marriage is unconstitutional.

And that, too, had critics weighing-in on Weibo, questioning the timing. Just last month, China took down another app catering to the LGBTQ community in China: Zank, which had been one of China’s leading gay dating apps.

The takeover of Grindr by Beijing Kunlun Tech Company, a Chinese gaming company, was a first for the formerly American-owned start-up, now valued at $155 million. Beijing Kunlun acquired 60 percent of Grindr, reported The New York Times, with the rest split between Grindr employees and Joel Simkhai, the company’s founder.