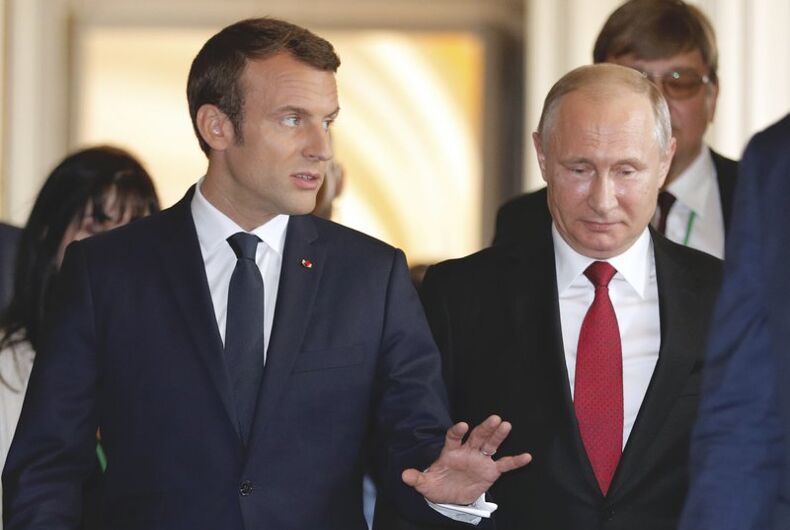 So far only two countries have made headlines for agreeing to take in gay and bisexual men fleeing abuse in Chechnya: Lithuania and France.

Lithuania granted asylum to two Chechen men earlier this month, and yesterday it was announced that France had taken in its first gay Chechen.

The United States is reportedly not granting visas to the men.

Representatives from the Russian LGBT Network, which has helped evacuate 43 people from the region, told the BBC earlier this month that they were in talks with five countries offering to help, two of them non-EU.

“It’s very important to act, because they are suffering,” said Lithuanian Foreign Minister Linas Linkevicius, who would not reveal the names of the other countries in talks with activists, but called them “allies.” The activists working to place refugees would also not name the countries they were speaking with about granting visas.

German Chancellor Angela Merkel pressed Russian President Vladimir Putin on the reports of the abduction, torture, and killings of gay and bisexual men during their meeting on May 2, but so far there are no reports of the country granting the men asylum.

It seems we won’t find out the identity of any of the other countries in talks with advocates until such a time when they decide to take action.

While it takes courage to speak out and demand an investigation in the atrocities these men have faced, it takes much more to take them in and provide them with safe haven.

Officials from both the UK told the BBC that claims for asylum must take place in Britain, and officials from the United States likewise told BuzzFeed News they cannot grant asylum until after the men leave Russia. They also noted that, “There is no visa classification designated specifically for humanitarian relief.”

That poses problems, as advocates worry about the likelihood of asylum seekers finding another country if that path fails, and also said there is a possibility that the men could be returned to Russia “on trumped up charges.”

Thankfully Lithuania and France have shown they are true allies in the fight for human rights, but we await others to put their actions where their words have been at a time when only action will do.

Lebanon may ban ‘Wonder Woman’ for the dumbest reason possible