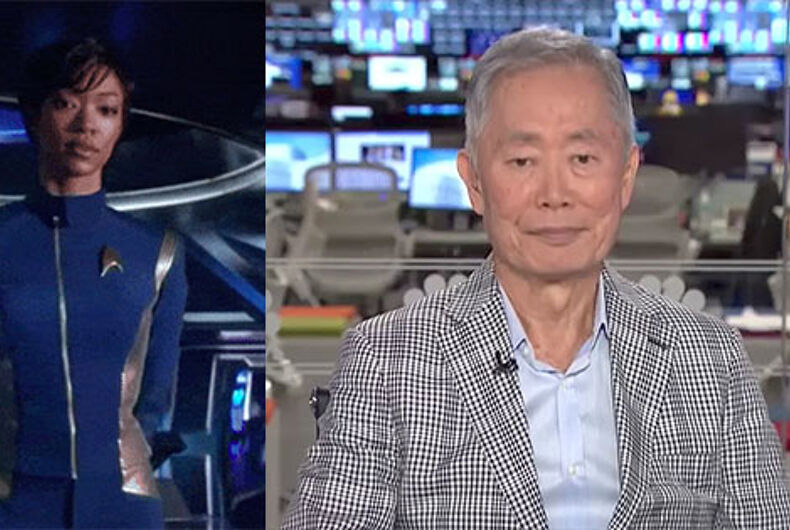 Trailers for Star Trek: Discovery released earlier this month proved that the series is living up to its higher ideals by centering women and people of color. The ship’s captain is played by Michelle Yeoh, and Sonequa Martin-Green, best known for playing Sasha on The Walking Dead, plays the ship’s first officer. Both are prominently featured in the show’s first trailer.

This drew cheers from most, but the predictable backlash from the crowd who sees social progress in media as little more than SJW pandering at best and “white genocide in space” at worst.

George Takei would like to remind the “trolls,” as he calls them, that criticizing Star Trek for its diversity makes no sense, as the series has had that message as a guiding theme from the beginning.

“And some of these trolls go on to be presidents of nations.”

Takei noted that Star Trek creator Gene Roddenberry led the show under the guiding acronym “IDIC ― which stood for infinite diversity in infinite combinations. We boldly went where we hadn’t gone before because we were curious about what’s out there. And when you go out into space you are going to have even greater diversity.”

“Now these so-called trolls haven’t seen a single episode of the new series, because it hasn’t been aired,” he reminded. “So there you are on one count, they have never seen what they’re talking about. And they don’t know the history of Star Trek, that Gene Roddenberry created this with the idea of finding strength in our diversity, and also the delight of life in diversity.”

Takei said some progress has been made in the country, pointing to his own experience when he and his family were taken to a Japanese internment camp after the bombing of Pearl Harbor. He said, however, that our current president is “ignorant” of that history.

“The president was totally ignorant of the history of internment here,” Takei said. “I invited Donald Trump to come see Allegiance, the musical we did on that subject. He never came.”

He called the trolls “equal to the President of the United States.”

“I think the president is as foolish, and as uninformed, and as ignorant, as these trolls are,” he concluded.