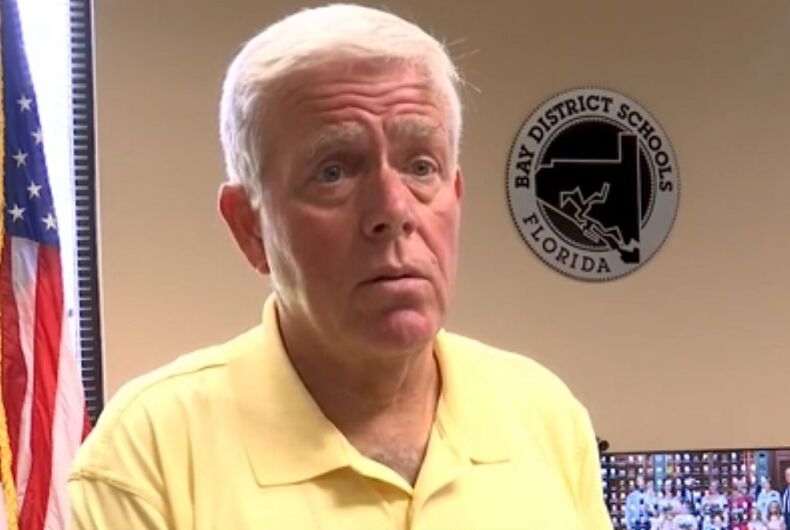 Bay County, Florida Superintendent of Schools Bill Husfelt is claiming he was used as “a political pawn” after he said that he believes being gay is a choice because of “God.”

In a video shared on social media by the LGBTQ Center of Bay County, the group’s president, Cindy Wilker, asked Husfelt to confirm that he said at a GOP meeting that being “gay, lesbian, bisexual, or transgender is a personal choice.”

“You did ask me that. I said yes,” he responded.

“And I’d like to know, on the other hand, who are you relying on?” she asked.

Husfelt responded with one word: “God.”

Later, in an interview with WMBB-TV, Husfelt claimed that he was “set up.”

“This was set up as a political pawn to try to get me to say something or do something that would cause some controversy,” he said. “I love all students.”

“It doesn’t mean that I’m anti-student because someone might be gay or something. You won’t find where I’ve ever treated anyone unfairly. We have gay alliance clubs in many of the schools.”

Wilker, though, accused the school of being worse for LGBTQ students than other schools in the area. She told WMBB-TV that free LGBTQ programming offered by Equality Florida has been implemented in about 65 school districts in the state, while Bay County has refused to adopt it.

The district claimed they had originally scheduled the programming in 2018, but it was delayed due to Hurricane Michael. Now they claim they will implement it when the pandemic is over.

Husfelt, who has also said he does not believe systemic racism is a problem in America, is currently running for reelection to a fourth term as school district superintendent.

Wilker emphasized that she plans to ask his opponent, fellow Republican Judith Vandergrift, the same line of questions.

“I didn’t have the opportunity to ask Mrs. Vandergrift, but I certainly will,” she told WMBB-TV. “I want every child to feel valued and affirmed.”