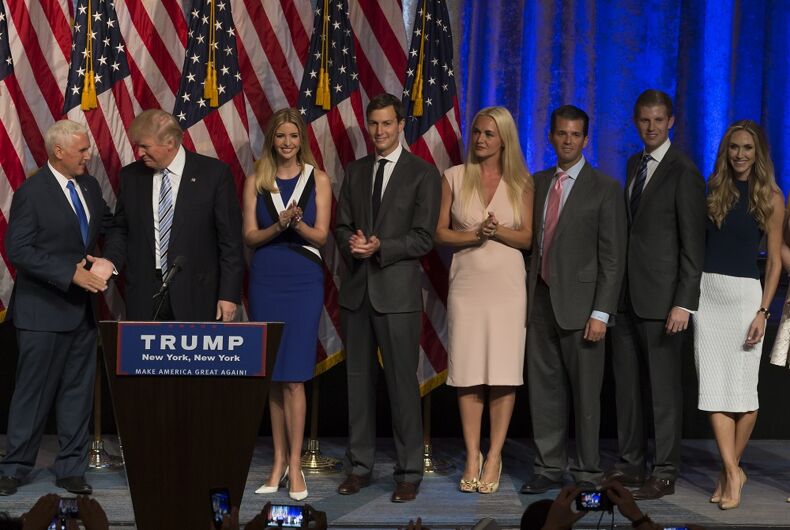 Donald Trump, Mike Pence, and part of his family.Photo: Shutterstock

Mary Trump, the niece of Donald Trump who just published the tell-all book Too Much and Never Enough: How My Family Created the World’s Most Dangerous Man, said that she never came out to her grandmother – Donald’s grandmother – because she heard her call Elton John a “fa***t.”

Mary Trump said that she was living with a woman in the 1990s and planning to marry her on a beach in Hawaii. Just before the wedding, the entire Trump family got together because Donald Trump’s father Fred Trump was sick and dying.

Related: Donald Trump might not have taken his SATs & now he’s kicking out international students

Mary Trump said that the family started talking about Princess Diana and her death. Out singer Elton John performed at her funeral.

“I’d realized it was better that she didn’t know I was living with… a woman,” Mary Trump wrote in her book, according to the LGBTQ website Towleroad.

“Homophobia was never an issue because nobody ever talked about gay people, well, until my grandmother called Elton John” the slur, she told the Washington Post.

In her book, Mary Trump described her grandfather Fred Trump as a “sociopath” but also as the powerful patriarch of the family.

She said that her uncle Donald is “clearly racist,” in part because he grew up in a family with “a knee-jerk anti-Semitism, a knee-jerk racism.”

“Growing up, it was sort of normal to hear them use the n-word or use anti-Semitic expressions,” she said.

White House press secretary Kayleigh McEnany – who has a history of anti-LGBTQ comments – said that Mary Trump’s book is “a book of falsehoods, plain and simple.”

Mary Trump currently lives in New York City with her wife and daughter.

Schools superintendent said “God” told him being gay is a “choice.” Now he claims he was “set up.”