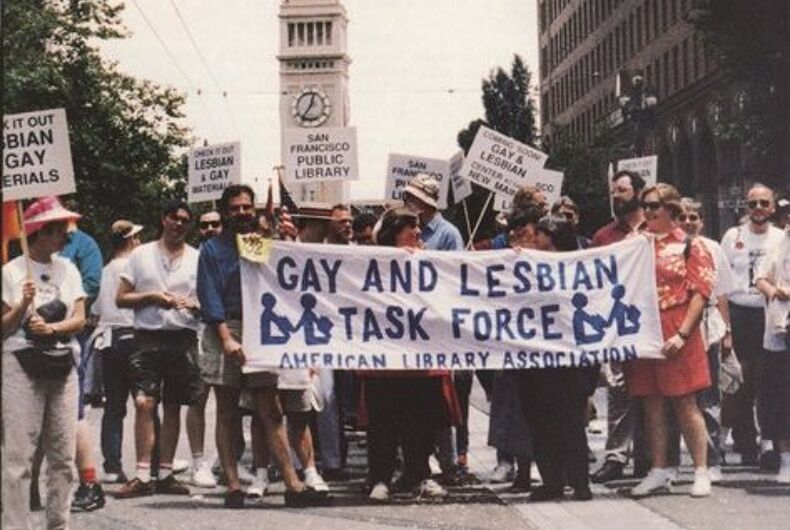 A group of librarians holding up a "Gays and Lesbian Task Force" banner at San Francisco Pride, as seen on the July/August cover of the periodical American Libraries, Vol. 23, No. 7, 1992.Photo: Jane Lowrey

“By coincidence, the annual convention of the American Library Association often falls at the same time as Pride. In June 1987, I was attending the ALA convention which is in San Francisco. I had meetings on Pride day, but did manage to slip down to Market Street to see a bit of the Parade. I stopped to watch next to a tall young man. I heard him say to his friend, ‘do you know there is a convention of librarians in town?’

“I tapped him on the arm and said, ‘in a few minutes there will be a whole group of us marching in the parade.’ He threw his arm around me and shouted ‘Look everybody, here’s one of them!’ Stereotype broken – great day.

“This picture is from my second Pride parade, but my first time marching and my first time being photographed at one.  The picture ended up as the cover of American Libraries, the flagship ALA magazine. I am the one holding the banner above the word ‘lesbian’. The organization got some push back on the cover – a few people wrote unkind letters and a few even resigned from the organization – but my boss loved it and insisted on showing the Library Board. Only time I have ever been on the cover of a magazine…pretty amazing.”