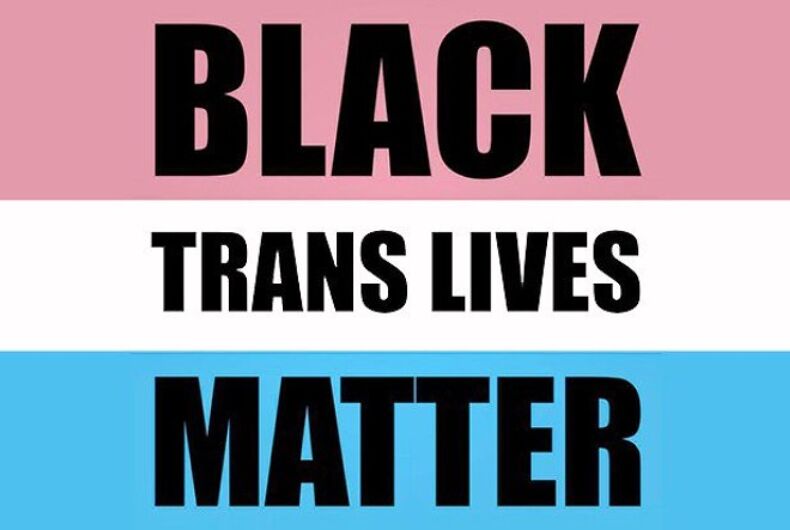 This month’s historic Supreme Court ruling that LGBTQ employees are protected in the workplace by the Civil Rights Act of 1964 was another step forward in the march for equality. While there is much to celebrate, this ruling comes as our nation is suffering from centuries-old systemic racism and grieving its latest victims.

George Floyd and Breonna Taylor were killed by police officers. Twenty-five-year-old Ahmaud Arbery was gunned down on a run by two white men. We need to say their names, know their stories, and recognize why they were deprived of a full life.

But we also need to shine a spotlight on the victims who rarely make it into mainstream media. All across America, the lives of Black transgender people and their bodies are being devalued and harmed.

In 2020 alone, at least 15 transgender or gender non-conforming people were violently murdered. This is not a new trend but one that has persisted for years.

Black Trans Lives Matter. America’s labor movement will not only be an ally to make sure these words hold meaning, but we will continue to make sure we protect and uplift Black transgender lives in our contracts and our communities.

Make no mistake, this fight for equality is a labor issue.

A survey from the National Center for Transgender Equality found that nearly 15 percent of respondents were members of a labor union or employee association. And that same study confirmed another disturbing reality.

Over 77 percent of those surveyed reported taking steps to avoid mistreatment in the workplace. These actions range from hiding or delaying their gender transition to even quitting their job.

For every transgender worker, the simple act of entering a restroom or locker room can be a terrifying experience. Derogatory words are hurled, often without any consequences. Sometimes, these confrontations even turn violent. This runs counter to everything the labor movement stands for.

Throughout our history, the AFL-CIO been on the frontlines in the fight against discrimination. We marched for the Civil Rights Act of 1964, the law that now protects LGBTQ workers from being fired because of who they are. We fought for the Equal Pay Act, the Age Discrimination in Employment Act, and the Americans with Disabilities Act. And in 2013, the AFL-CIO amended our constitution to add a provision banning discrimination based on gender identity or gender expression.

Our two movements share common values and aspirations: dignity and respect, equality, and solidarity. That’s why we continue to push for the Equality Act, legislation that would codify and expand on the Supreme Court’s Title VII decision by explicitly banning discrimination in workplaces, housing, public accommodations, and more.

To win better laws, we also need better lawmakers. The labor movement is focused on electing candidates up and down the ballot who understand the intersectionality of worker and LGBTQ rights.

But the American labor movement must also look inward, ensuring everything we do sends a message of inclusion, not exclusion. If we are being honest with ourselves, we have not done enough for Black transgender workers as a movement. We know that the power of unions, when leveraged properly, can protect Black transgender working people from the kinds of discrimination that have become too typical.

Nearly every collective bargaining agreement has some form of nondiscrimination clause that, at the very least, references state, local, or federal law. Now that federal law says that sexual orientation or gender identity discrimination is equivalent to sex discrimination, those contracts got an upgrade. It’s on us to ensure each union upholds these changes.

Every survey confirms that local unions are the labor movement’s best messengers. So when our leaders on the ground speak out publicly and negotiate and defend contracts that ensure everyone has dignity on the job, it can have a dramatic impact on the lives of Black transgender union members.

Within labor, our commitment to historically underrepresented communities is to build meaningful partnerships. As a start, let’s work with Black transgender-led organizations and invest in Black transgender leadership within our unions. And we must listen to Black trans union members.

As our LGBTQ constituency group, Pride at Work, travels the country providing training on how to be the most inclusive movement possible, they are told stories of union members having to fight for access to bathrooms, changing rooms, and locker rooms. They hear firsthand accounts of workers being misgendered or told their dress is too “sexual” only because it matches their gender identity.

For workers of color, these injustices are multiplied. This is still happening under our roof and our watch, and we are committed to stopping it. Harassment, abuse, and hate have no home in the House of Labor—nor anywhere in America. At this crossroads in history, the labor movement will stand shoulder to shoulder with Black transgender workers and affirm through our actions that Black Trans Lives Matter.

Pride in Pictures: Note to the librarian