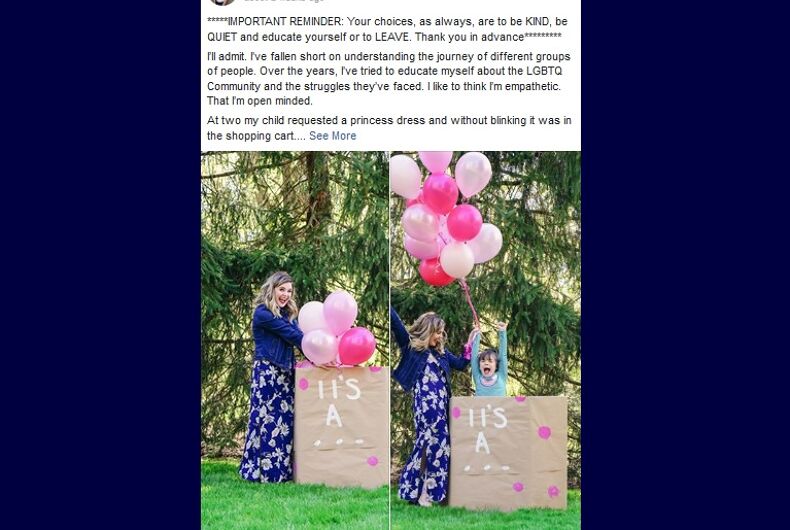 Little Avery stepping out the box with a bunch of pink balloonsPhoto: Screenshot/Facebook

A mother held a gender reveal party to celebrate her transgender 6-year-old’s gender.

Earlier this month, a woman named Zoe Lynn posted pictures on Facebook of her daughter jumping out of a box holding pink balloons. The box said, “It’s a…,” reminiscent of a gender reveal party.

Related: This awesome mom celebrated her son’s transition with a gender reveal photoshoot

“So, as the proud mommy of a six year old girl, I’d like to introduce you to my daughter, Avery,” Zoe Lynn wrote.

Lynn wrote about her journey to accepting her daughter for who she is.

Her daughter was assigned male at birth and Lynn said that she thought that she was “open-minded” about gender. When the girl wanted a princess dress at age two, Lynn bought it for her. When her daughter wanted to take musical theater lessons and wear a dress, Lynn said she and her husband supported her.

“I don’t believe clothes or colors or toys have genders,” she wrote. She and her husband “have always made that clear and kept all the choices open.”

But keeping the choices open when it comes to gender expression, she wrote, is different from accepting that your child is a different gender identity.

Last year, Avery told her dad before school, “My life didn’t turn out the way I planned. I think I should just stab myself in the throat.”

“I have never felt a worse feeling in my body. How. How can a 5-year-old who doesn’t even know a fraction of what the world is or what life or death is, even think like that?” Lynn wrote.

She asked Avery what she meant after school, and Avery said that it was “a secret.” But after some prodding, the kindergartner came out as transgender.

“I was supposed to be a girl but I’m a boy,” the five-year-old said. “So I think I should just stab myself in the throat.”

Lynn said that she wasn’t ready for that, but she drove to the Gap to buy girls’ clothes for Avery, telling her “about how she CAN be a girl. That people feel the way she does. That we have friends and family that were born and people thought they were one way but they always felt another.” Then they went to the bookstore to get books for transgender kids.

But all the while, Lynn wasn’t feeling comfortable herself – she was being strong to save her daughter’s life.

“I’ve CRIED over this,” she wrote. “I fell in love with a baby boy for years and had to let that go. I had to mourn the memories of naming my child and the ‘boy’ things she will probably spend the rest of her life trying to forget. I cried because I KNOW that my child’s life is going to be so SO much harder than other kids’ lives now.”

“But then I stopped crying,” she wrote. “Because as much as I feel I’ve struggled, it will be so much harder for her. And while we already have a few people in our lives who are vocally unsupportive – we have an INCREDIBLE, AMAZING group of people that have never made her feel more loved.”

And now, less than a year later, she’s sharing her daughter’s gender with the world.

*****IMPORTANT REMINDER: Your choices, as always, are to be KIND, be QUIET and educate yourself or to LEAVE. Thank you…

Gender reveal parties are a trend where expecting parents hold a party in which some central stunt – like cutting a cake, opening a box of balloons, or setting off a pipe bomb – shows everyone the child’s gender (that is, the sex they will likely be assigned at birth, as determined by a doctor who looks at the fetus’s genitals during an exam).

The person who started the trend in 2008 has criticized it for over-stressing the importance of sex assigned at birth, and the many families post videos of family members who are disappointed when they find out the baby’s gender. The parties have even led to deaths as the gender reveal stunts have gotten more elaborate and more dangerous.