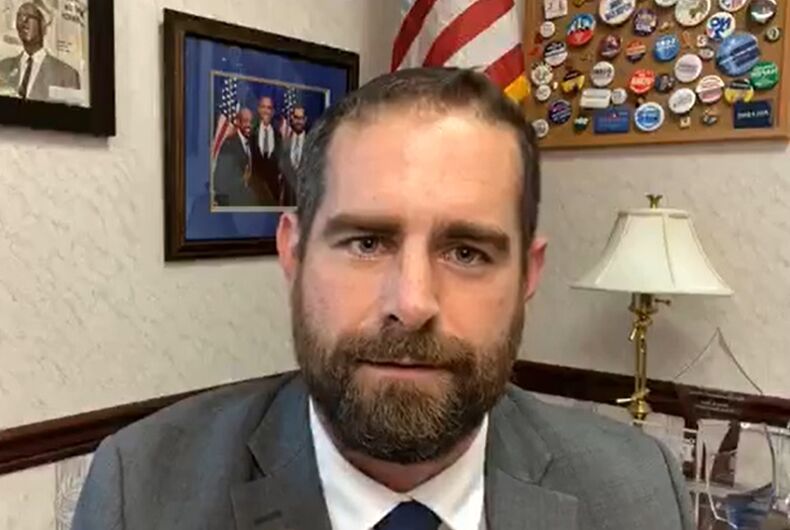 Sims’ Facebook Live video was broadcast from his office and the visibly angry lawmaker held nothing back. Riddled with curse words and blunt language, the out legislator ripped into Republicans and demanded resignations and investigations.

“For as much as a week – perhaps longer – House Republican leadership knew that at least one of their members had tested positive for COVID-19 – that other members who were exposed to him would eventually go on quarantine but they didn’t go on quarantine until they were done serving alongside us,” Sims said in the video. “They were notifying one another and they didn’t notify us.”

In the video, Sims trashed Republican lawmakers for not taking the pandemic seriously in public, downplaying the risks of the pandemic and trying to re-open businesses early.

Sims specifically named Rep. Russ Diamond (R), who was in quarantine for weeks, while publicly saying that the state was “safe” from the virus.

Diamond, according to Spotlight Pennsylvania, is one of the most vocal opponents of anti-coronavirus measures, posting videos to social media of himself going shopping without wearing a mask.

State Rep. Andrew Lewis (R) tested positive for COVID-19 on May 20 and went into self-isolation, according to a statement. Lewis said that he contacted Republican leadership, which tried to find who was at risk of exposure to tell those people to self-quarantine, but Republican leaders did not tell Democrats despite continuing to hold legislative hearings.

“Out of respect for my family, and those who I may have exposed, I chose to keep my positive case private,” Lewis said in a statement yesterday. “Now that I have fully recovered and completed the quarantine as required by the Department of Health, I feel now is the appropriate time to share this information with the public and my constituents.”

That statement set Sims off.

“I know one of the members put out a statement saying ‘I was looking out for my family,'” Sims said in the video. “Well, you were exposing our families.”

Sims went on to say that a member of the state House has a wife who is immunocompromised and that Sims himself has recently donated a kidney.

“You have no idea how the people around you are impacted and that’s why it’s so important to notify people,” Sims said.

Sims called for State House Speaker Mike Turzai (R) to resign, as well as any member of the Republican leadership who knew about Lewis testing positive. He also called for the state attorney general to investigate and prosecute for “exposing all of us up here to this crap while covering up what was going on.”