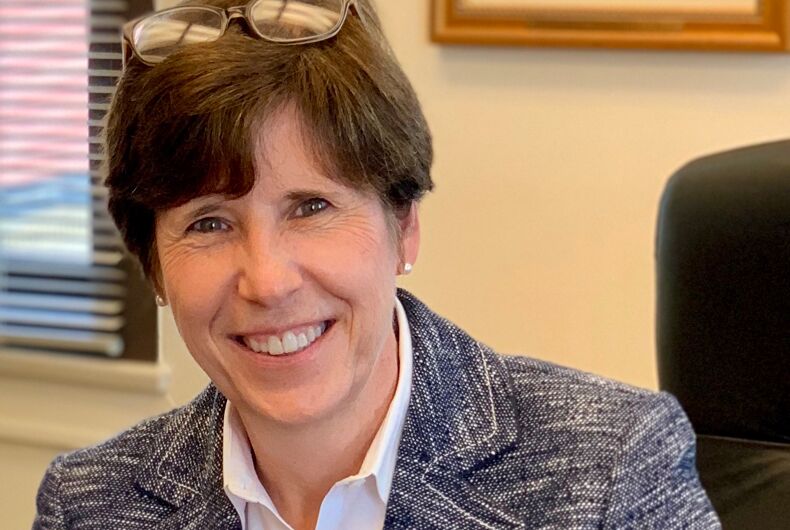 Being part of history would be exciting, of course, but for Hackett there is far more at stake. If she wins her primary election, she would likely run against incumbent Rep. Jackie Walorski (R), an anti-LGBTQ right-wing extremist with a voting record that Hackett describes as “abysmal.”

Related: Meet the Republican candidate so “disturbing” even the GOP is dropping their support

“I think that my district and this state is very ready for this,” Hackett told LGBTQ Nation. “I think it’s consistent with the values of this district, that people in this district want equality under the law.”

Hackett, a lawyer and a person of Catholic faith, studied both government and theology at Notre Dame. She believes her understanding of religion and law—as well as the way they intersect—make her an asset to a federal government that continues to use religious beliefs as a weapon.

“Absolutely all people are equal under the law whether they are persons of faith or not of faith,” Hackett said, “and one of the things I am very committed to is not only religious freedom, but also the Establishment Clause and the protection of persons who are not of faith, or religious minorities.”

“I think that’s really important because right now, Christian nationalism poses a great risk to our democracy, and I am particularly well equipped to address that crisis we’re experiencing.”

Hackett believes religion is rooted in the concepts of love and inclusion. Politics, law, and theology, she explained, all ask the same fundamental question: What does it mean to be human?

“I think a real easy way to see how they come together for me is the theme of the campaign, which is dignity and justice for all, not the few. I believe all human beings have value, are inherently good, and have rights and responsibilities under the law, and it’s incumbent upon those of us who want to be involved in politics to foster right relationships with one another.”

“What he’s doing,” she said, “is using the extreme religious right to foster his authoritarian purposes, and it is in that regard that it’s grotesque. But also because his agenda is extremely dehumanizing. He’s promoting prejudice under the guise of religious liberty.”

“He’s promoting policies in particular that are extremely harmful to religious minorities, to women, and to the LGBTQ community, both nationally and internationally.”

Congress, she said, needs fewer people creating division and more people building bridges. Hackett believes she can do the latter.

“We need to move away from the idea that to be a person of faith, you have to reject the commitment of this nation to dignity and justice for all,” she told LGBTQ Nation. “One can be a person of faith and be robustly committed to evidence, science, and reason—and an inclusive worldview.”

Hackett is openly campaigning as an LGBTQ candidate and as someone in what she prefers to call a “same-gendered marriage.” But she also chooses to avoid any specific label.

“I prefer not to use labels because I find they quickly get reduced to caricatures of a person,” she said, “and people can themselves get reduced to that label. I think it’s important to be more inclusive and say I am part of the LGBTQ community.”

This campaign is Hackett’s second attempt at the congressional seat. She first decided to run in the 2018 midterms after Trump was elected President.

“I think we are at an absolutely critical turning point as a country,” she said, “and the US will either go forward as a democracy and a beacon of hope to the people not only of this nation, [but also] internationally, or we will not.”

In 2006, Hackett opened her own law firm, Hackett & Associates. She said her experience as a business owner will also no doubt affect the way she leads in Congress.

“I know what it is to try to make payroll,” she said. “I know the consequences of trying to have a health plan and taxes. Republicans will argue you can’t elevate Democrats because they’re hostile to business. I’m a business owner.”

“I’m an entrepreneur, but I am for responsible capitalism, very much aligned with Elizabeth Warren’s view in this regard. I will bring a practical perspective and a real-world perspective as a business owner. It’s not just academic for me.”

Hackett added that the most important thing voters should know about her is that she genuinely believes in the values of her campaign. “I am committed to being…the representative of all the people in this district,” she said. “Democrats, Republicans, independents, and all of our diversity in this district. I will work my heart out for them.”

That time two lesbians helped get Roseanne yanked off television